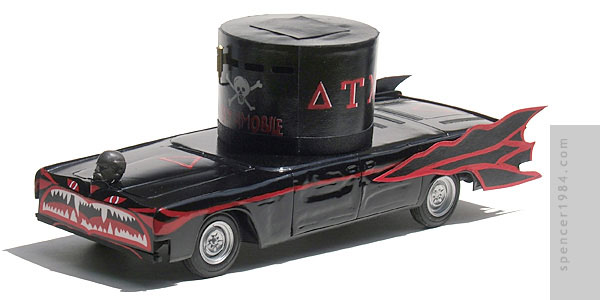 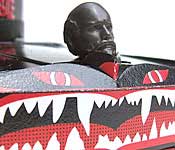 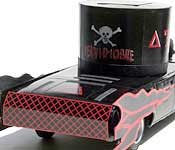 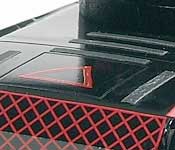 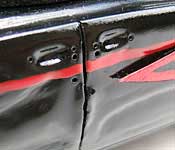 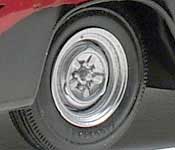 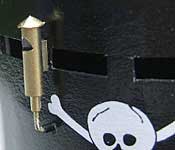 Like the car in the movie, my Deathmobile started as a stock Lincoln Continental that was too new for the project (the Lincoln used in the movie was a '64, despite the movie being set in '62). I began work by cutting off anything above the beltline, and distressing everything that was left. The trunk hatch was mapped out and scribed directly into the decklid. I then used plastic to create the turret deck and convert the front fenders to a more accurate '64 style, while rectangular stock was used for the front bumper. The chassis also needed to be modified to get the correct stance as seen in the movie, and it now rides on a set of steel wheels from Revell's '64 Ford Thunderbolt. Because the car is essentially a closed box, I only did minimal engine work and the interior was left out altogether.

The masks, fins, and turret were all created in Illustrator and printed onto card stock. The masks could go on the car as they were, but a little work was needed to give the other parts enough rigidity so that they wouldn't sag over time. So the fins were made by laminating two sheets of card stock together, and the turret was built around a paint cap. A hole was cut in the cap to match up with the viewports in the skin, and the inside was done in black to give a sense of depth. Fabric tape was used around the base of the turret to simulate the fine mesh used on the 1:1 car.

Once assembled, the deathmobile needed only two more details to look the part. The head of Emil Faber's statue was made by modifying a 3¾" Star Wars Obi-Wan Kenobi head, and the steam whistle was scratchbuilt.