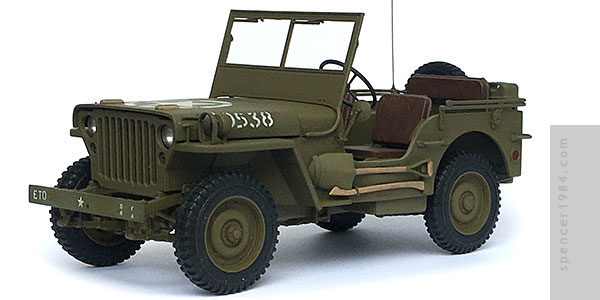 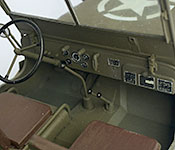 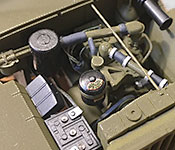 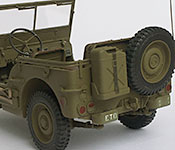 Back when I posted the Kelly's Hero's Jeep, I noted that I used the gun, helmet, scabbard, and a few other bits from Hasegawa's MB. That left me with a complete but stripped-down Jeep in the Hasegawa box. Fortunately, in the film adaptation of Erwin Nathanson's The Dirty Dozen, Lee Marvin used just such a Jeep for much of the first half of the film. As with most Hollywood vehicles, there were a few discrepancies depending on which prop was used for filming on any particular day, so I tried to find a good middle ground that captured all the broad strokes.

Most of it was built straight out of the box, which let me focus on the overall quality of the kit. I think Italeri might still have the edge here, but barely: fit and finish were very good, there were very few seams that needed to be cleaned up, and overall it just went together nicely. The biggest challenge was attaching the body to the completed chassis. The small number of contact points meant that any slight warp would prevent the two from connecting properly. The next time I build one of these, I am going to see about assembling these sooner and putting together the top of the body later - fewer panels to work around will allow for better clamp points as well as give me a way to get the engine in later. I did like the way that Hasegawa made the suspension: to make sure everything was sturdy without making the springs too large, they simply added a thin standoff between the axle and the frame rail at each corner. The design is neat, the standoffs are unobtrusive, and if you prefer realism over solidity they're easy to cut off.

There were only two real changes needed to match the movie Jeep. First, I left off the wiper motors and replaced them with cranks (none of the movie's Jeeps had motors, and at least one didn't even have wipers). I also added an antenna to the right rear corner, as seen in the sequence leading up to the site of the future barracks. None of my research turned up any Jeeps having this on the right rear, so I considered it a not-quite-to-spec field modification and scratchbuilt a base and antenna that looked like they could have been scrounged for the cause. Because I was leaving the hood loose on this one, I added a few extra details under the hood: ignition and battery cables were made from wound thread and fisihing line, and a fuel line and brace from metal and plastic rod.

In an effort to keep a uniform look across my WWII Jeeps, this was painted the same Model Master 1911 Olive Drab as Kelly's Jeep. The markings are a combination of stars left over from the Italeri Jeep and numbers from Archer Fine Transfers. Weathering was fairly light this time around, focusing on places that were likely to see the most wear including the engine/exhaust, left foot well, and around the wheels. I also knocked off some of the stark white of the lettering with a combination of green and gray effects. I used the kit-supplied decals for the dash and engine markings, but was very disappointed in their quality: they were reluctant to leave the backer, and when they did the white areas tended to flake off. It was a messy process that left me having to do a lot of paint touch-up work once they were on.

Aside from the decals and the somewhat challenging body-to-chassis fit, this was a neat little kit. It's been reissued recently, and I'm looking forward to building another one of these to see if the decal situation has been resolved.