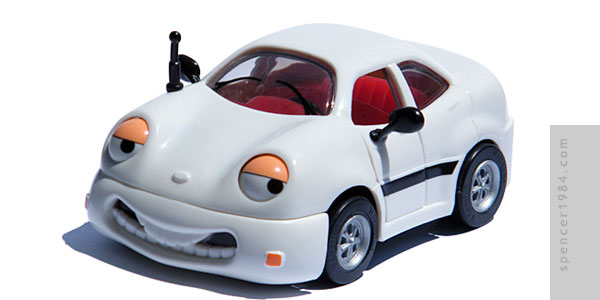 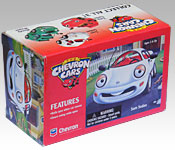 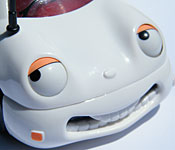 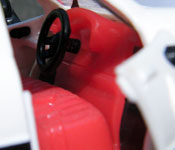 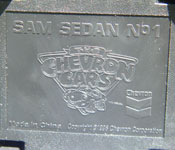 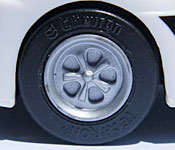 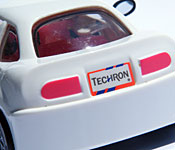 In May 1995, Chevron debuted a new advertising campaign featuring animated cars extolling the virtues of Chevron's new Techron gasoline additive (Techron-enhanced fuel was among the first to be named as a "Top Tier Detergent Gasoline"). The commercials were created by Aardman Studios, using a clay animation style popularized in their Wallace and Gromit series. Chevron gas stations began selling toy cars based on Aardman Studios' designs the following year, starting with Sam Sedan.

The first set of Chevron Cars came in windowless cardboard boxes, approximately 6" (150mm) x 3.875" (95mm) x 3" (70mm). The front panel features a large portrait of Sam in a residential driveway off-center on a red background. To the left of the picture is the Chevron Cars logo, features (Rolls eyes when car moves/Doors swing wide open), and Chevron logo. The age restriction is printed twice on the picture. The bottom of the box is nearly identical, though the image is cropped a little differently, the features list is gone, and the age restriction has been replaced with "Though he's lived through potholes and speed-bumps, Sam Sedan keeps every part of him clean." Each end flap has a wider crop of Sam's portrait with no text. The top panel has the Chevron Cars logo and photos of the three original cars (Sam, Wendy Wagon, and Tony Turbo) above a big "Collect all 3!" The back panel has a photo of the toy with call outs for his moving eyes and opening doors, another Chevron Cars logo, the legal info, and the text "You'll have loads of fun with Sam Sedan. He's clean inside and out." Sam is secured inside the box between two plastic trays, and has an "Owner's Manual" that includes instructions, a character bio, and a removable character card. The manual makes multiple references to Sam keeping an eye up, a reference to his commercial where he kept moving out from under birds that were perched over his driveway. Overall this packaging is the best of both worlds, protecting the car while providing a fun and unique design.

Sam is primarily cast in white plastic, with black plastic mirrors and antenna, clear windows, silver wheels, and black vinyl tires. The casting is intentionally soft to mimic the animated cars, but has several nice details like the distinct teeth, hood ornament, corner marker lights, and door handles. "Chevron/Techron" is printed on the sidewalls of all four tires. The marker lights are painted orange, the taillights are painted red, and the mouth, wipers, and side moldings are painted black. Everything is cleanly applied, with only minor ghosting inside his mouth. The eyes are black and white with pink lids, also very cleanly printed. The rear license plate is a printed sticker, and the sideview mirrors have silver stickers acting as mirror glass. The interior is red with a black steering wheel, and also features some nice cast-in detail like seat belts and an instrument cluster shroud. There is no engine, and the chassis is a simple plate with his name and series logo cast in.

Sam has two primary features: opening doors and moving eyes. The doors are simple hinges, and line up reasonably well considering the odd-shaped openings. The eyes are activated by pushing down on Sam's hood and rolling him forward. They move clockwise as he goes forward, with no movement backing up. The internal gearing is very smooth, and works flawlessly. He is a bit wall-eyed if you stop at certain angles, but that actually fits his animation model.

This is a pretty faithful representation of what Sam looked like in his TV spot. The biggest thing he lacks is the black gaskets around his eyes and windows. A few other details are also missing but less noticeable, like paint apps for is hood badge and door handles. But the proportions look good, and his expression is instantly recognizable to anyone familiar with Nick Park's work. He is not based on any one particular car or scale, measuring 5.5" (140mm) long, 3.75" (95mm) wide, and 2.375" (60mm) tall.

It's easy to see why the Chevron Cars were such a hit: they're inexpensive kid- and collector-friendly designs that look great by themselves or with other ~1/25 scale vehicles. They're still fairly easy to find on the secondary market, but will likely become more difficult as time goes on. If they look like something you're interested in, I suggest getting them sooner than later...and if you're into collectible cars or advertising memorabilia, there are definitely something you're interested in. Recommended.