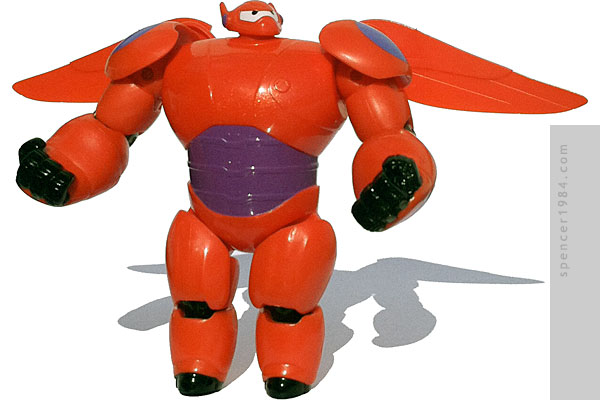 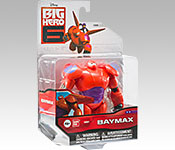 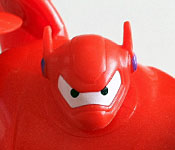 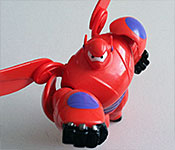 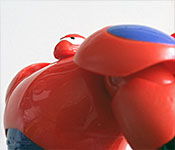 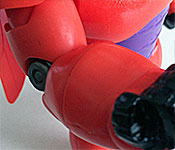 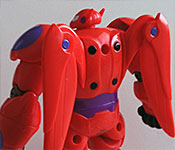 Loosely based on the Marvel comic of the same name, Big Hero 6 tells the story of six young heroes woking together to stop a masked villain. Five members of the team—Hiro, GoGo, Wasabi, Honey Lemon, and Fred—are robotics prodigies, while the sixth member—Baymax—is a healthcare robot constructed by Hiro's brother Tadashi. Baymax's soft inflatable body works perfectly in his intended role, but when it's time to save the day he needs something a little more substantial. Hiro upgrades Baymax with a flight-capable suit of armor and a battle chip.

Bandai's Big Hero 6 4" figures are all packaged in blister packs with identical cardbacks and custom inserts to match the figure. The cardback is 5½" (14cm) x 8¼" (21cm) with truncated top left and bottom right corners. It's made out of a very heavy cardstock to guard against bends and tears in the store, with an extra plastic strip reinforcing the hook cut into the top center of the card. At the top of the front panel is the "stacked" version of the movie title logo and an image of Baymax in flight with Hiro riding on his back set against a clean white background. The background fades into a light grayscale image of the city behind the figure, which looks cool and is a nice way to add a subtle flair to the design. The back of the card has close-up "hero" portraits (l-r: GoGo. Honey Lemon, Baymax, Hiro, Fred, and Wasabi) fanned out just below a "wide" version of the movie title logo. "Collect them all" is written in eight different languages below that, followed by product photos of the seven characters in the series (these follow the same arrangement as the portraits, with the addition of Yokai at the far left). The bottom of the card features about half of the legal info. The figure is in a clear tray inside of a clear blister that measures 5&frat12" (14cm) x 5" (12cm) x 2" (5cm), and the tray is wrapped around the sides and bottom of the cardback and taped into place. A thin cardboard sheet is cut and folded to fit in the bottom of the tray, and features a character portrait, name, figure number (#38601 in Baymax's case), Bandai logo, and age restriction on the front. the side panels have the character's name set on a field that resembles Baymax's armor, and the bottom panel has the remaining legal info and bar code. Because Baymax is the largest figure in the series, he very nearly fills the tray. His wings are bagged and packed between the tray and the cardback. Overall its a very well thought out package that keeps the figure safe, is easy to look through in stores thanks to the names on the side panels and (surprising for a blister pack) can be reused.

Baymax is primarily cast in orange plastic, with either a metallic swirl or metallic paint covering most of the torso. The arms, legs, and wings do not share this finish, and are more of a flat orange color. Most everything fits together nicely, though there are several sprue connection points that could have been trimmed neater. Purple is used for Baymax's abdomen, shoulder pads, forearm guards, ears, and wing hinges. Black is used for the feet, knees, fists, internal elbow joints, and magnets. Gunmetal is used for his knuckles, external elbow joints, and knee back details. Baymax's face is white with black eyes. For the most part, everything is painted sharply with no ghost issues or registration problems. The only exceptions are the knuckle of the index finger on his right hand, and the edges of the internal elbow joints, neither of which really subtract from an otherwise very slick look.

There are some very slight marks scattered across the suit that are the result of molding flaws, but none of them stand out and could even be chalked up to light battle damage without stretching the imagination too far. I do have one complaint, though it's one Bandai has heard a thousand times: Baymax's back is interrupted by five screw heads. This is something Bandai does on all of their figures, which is too bad, but at least in this case its not an organic figure with screws in their back.

Baymax has 15 points of articulation: head, wing bases, shoulder pads, shoulders, elbows, forearms, and hips (separate joints allowing side-to-side and front-to-back movement). All of these are simple swivels, so they don't interrupt the design but also don't allow for more extreme poses. The right hip on my figure is also very close to the torso armor, limiting what little range it had even further.

He's very close, though there are a few minor discrepancies when comparing Baymax to his animation model. The armor on his legs is not quite as sharply defined as it should be, his forearm circles are too large, his thumbs should have an extra section of orange, and his abdominal armor is missing a panel. Knowing how often the designs are tweaked before a film is finalized, these may all be based on earlier look. Baymax's true scale is a little difficult to pin down: he's 4½" (11cm) tall, not counting his wings. The Disney Wiki says that he is either 6'2" or 6'3" (presumably without his armor). If you go with the thought of Baymax having his "real" feet end at around his knees, then he's somewhere around 1/22 - 1/24 scale. If you instead go with the idea that Baymax is squished into the armor but his height is essentially unchanged, he's about 1/16 - 1/18 scale.

Baymax is a fun little figure that offers no real surprises (good or bad). His MSRP of $10.99 is a little steep, but I have yet to find any store actually asking that price. The standard rate seems to be around $7.50 - $9 at retail, which isn't too bad. Wal*Mart has had him on sale for as little as $2.50, at which point he's a no-brainer. Your best bet is to check him out, either in person or in photos, and if you like what you see you'll like like what you get.