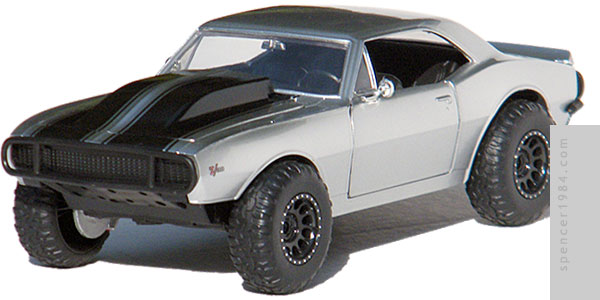 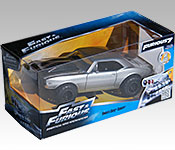 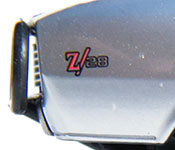 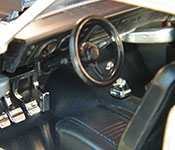 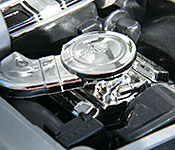 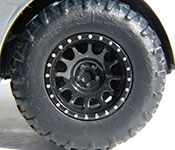 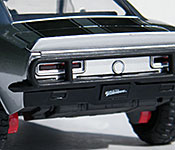 When the team needs to make a desperate rescue in an inhospitable area, they come up with a radical plan to air drop onto the road using specially modified vehicles. Roman is the one who first pitches the idea, but starts having second thoughts once he's actually in the field. Fortunately Tej had a backup plan in place for just such a contingency, outfitting Roman's modified classic Camaro with a second parachute to pull it out of the drop plane.

Distribution issues have made verifying which wave this belongs to difficult, but it is in the exact same packaging we first saw with wave 2, though the sticker on the front now reads "Roman's Chevy Camaro." Two screws hold the car to the interior tray as before, but the stickers holding things closed have been replaced with plastic bands over the hood, doors, and trunk.

Another one for the "win" column. The casting it a little bit rough in places, like the edges along the tops of the front fenders, but makes up for it with some fantastic panel fit. The paint is much the same, with a bad spot right at the leading edge of the left stripe but essentially flawless work on the base silver (and bonus points to Jada for using a silver that looks like silver paint, not unfinished metal). The only other paint apps beyond the stripes are the Z/28 emblems on the front fenders and beadlock bolts on the wheels. The grille, front and rear guards, and wheels are all cast in black; the tires are black vinyl; the sideview mirrors are chrome plated; the windows are clear colorless; and the taillights are clear red. The interior is a nicely cast stock Camaro interior (more about that later), with full seats - no hollow backs this time! The shift lever and pedals are cast in chrome, everything else is black with no extra paint detailing. The engine is entirely chrome plated in a black engine bay, with basic but recognizable details such as the valve cover scripts, battery, and distributor. The trunk is a plain black box. The chassis is Jada's usual black plate with shallow detailing, a chrome differential, and silver/red painted disc brakes.

The hood, doors, & trunk open. The hinges move freely, if a little loose on the hood.

Once again we come to Jada's primary weakness. The overall look is pretty good, with the right stance and nice screen-accurate wheels. Then you start noticing little details: the shape of the front chassis plate is wrong; the rear bumper had been removed on the movie car, not painted black; the side mirrors should be square, not round; fender flares were never added to the stunt car after the openings were radiused; the wipers should have been removed; the trunk stripes should have continued over the spoiler. Things get worse inside. Rather than the stock interior, Roman's car had Sparco front seats, sheetmetal in place of the rear seats, and a full roll cage. The engine has the original cowl plenum air cleaner, which negates the usefulness of a cowl induction hood. The net result is a replica that got the broad strokes down but missed nearly every detail. Scaling is also off, coming in around 1/22.

While not as clunky and ugly as their Charger, it isn't nearly as nice as their Challenger. The quality of the work is actually pretty good, it's just that they missed so many details that things start to look worse and worse the longer you spend with it. I don't hate it by any stretch...but the best use of it might be for parts to create a more accurate replica. If the accuracy misses don't bother you as much, you'll enjoy it even more.