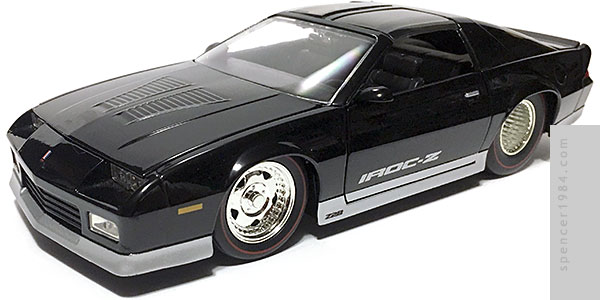 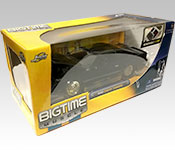 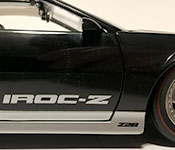 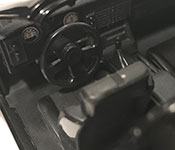 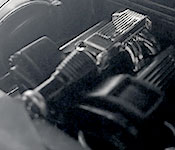 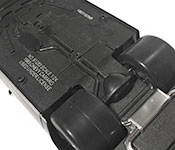 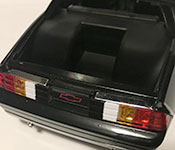 The third generation Camaro was a platform for many firsts: the first hatchback, the first four cylinder, the first with 16-inch wheels, and the first with fuel injection. It even broke a broader internal rule at GM limiting windshield rakes to 60° by placing the front glass at a more aerodynamic 62°. A limited number of convertibles were reintroduced to the Camaro in time for the model's 20th anniversary in 1987. This generation once again found a place in a major publication's top ten list, this time the IROC-Z in 1985's Car and Driver.

The Camaro is packaged in Jada's "Big Time Muscle" box. The only difference between this and other releases is the shape of the clear plastic trays holding the car in place, and the name tag on the front of the inner tray that now reads "1985 Chevy Camaro." There is also a sticker at the top right corner of the front window advertising the removable T-tops.

Continuing the theme we saw with the '67 and '71 Camaros, this was made when Jada's Big Time Muscle series was in its prime. The body is die-cast metal with plastic details for the sideview mirrors, grille, and lights. As good as the paint was on those older cars, this is arguably better still. The black is deep and glossy, with a sharp edge defining the matte silver rockers. The full-color Camaro flag is centered on the nose, a small "Z28" is printed on the rocker behind each front wheel, a large "IROC-Z" is in silver on both doors, and the rear bumper has "Tune-port injection" and "IROC-Z" printed in silver. The registration and printing on all of these is flawless, which is especially impressive on the emblem with its vertical stripes and intricate base. The front marker lights are printed on the front fenders in orange, while the rears are part of Camaro's distinctive wraparound taillights. These, along with the headlights, parking lights, and glass (including the T-tops) are cast in clear plastic. The tops and rear glass have a smoke tint, and the rear glass also has a sharply defined tint edge. Window fit is fantastic, with the parts designed to give a proper "flush fit" look. The rear lights have transparent paint for the markers and directionals, but the reverse lights are painted opaque white. As befitting this vintage, chrome plated plastic is limited to the light buckets and mirror glass—the door handles are painted to match the rocker trim. A small "Big Time Muscle" is printed in the bottom center of the rear window. Wheels are oversize Weld five-spokes in chrome, with big and bigger redline tires.

The interior is almost entirely black, with only a chrome rear view mirror and printed gauge faces breaking up the look. Chevrolet had eliminated the separate trunk for this generation, integrating the cargo area with the interior. For this model, most of the floor has been given over to a set of wheel tubs, with only a narrow channel remaining between them and across the back by the taillights. Even so, this model probably has the most cargo capacity of any Jada Camaro.

Under the hood is a reasonable facsimile of a 350 with TPI. The injection manifold is chrome plated, while silver paint has been used to pick out the valve covers, washer and overflow bottles, and some of the plumbing. The chassis is Jada's usual simplified pan, this time with a chrome crossover muffler. The oversize rear tires cut into the pipe a bit, but that's a small price to pay.

The hood, doors, and rear hatch all open on smooth hinges that hold their positions easily, and both T-tops can be removed thanks to a set of snaps.

As with the rest of Jada's "Big Time Muscle" series, this evokes the look and feel of the car without being an exact replica. The third-gen Camaro was nearly monolithic with its 1980s styling, and the ground effects and achromatic paint further its appearance as a brutal street machine. Scaling is the usual oversize, still around 1/22.

These Camaros have always been a personal favorite of mine, and Jada did a great job capturing the look and feel of the IROC-Z. Another highly recommended entry in their Camaro series.