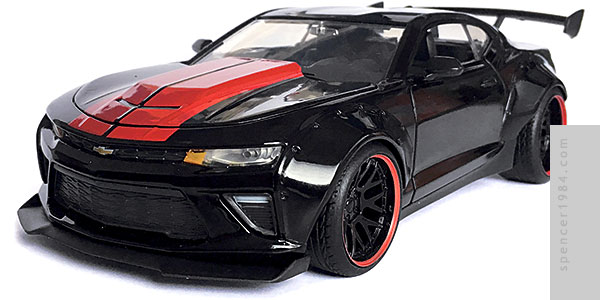 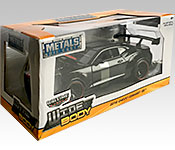 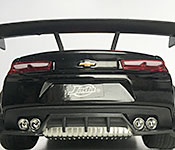 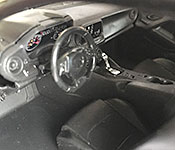 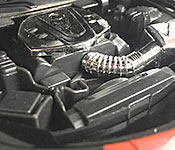 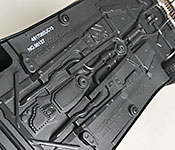 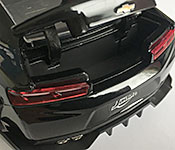 Leading up to Camaro's 50th anniversary, Chevrolet unveiled an all-new Camaro for the 2016 model year. Two inches shorter, over 200lb (91kg) lighter, and producing nearly 30 more hp than the previous generation, the 2016 SS was a unique machine that shared less than 30% of its architectural components with anything else in the GM stable. Befitting its improved performance, the sixth-generation ZL1 became the first Camaro to run in NASCAR's flagship series in the 2018 racing season.

The Camaro is packaged in Jada's updated three-window Bigtime Muscle box. This design is primarily orange with a white band that goes across the front panel and both end flaps. The "Bigtime Muscle" logo has been downsized to a single appearance on the lower left of the front panel, supplanted by the "Metals Die Cast" and "Wide Body" logos, which are printed on the front and both ends. "2016 Chevy Camaro SS" is printed across the front panel under the window, and "8+/Die Cast Metal/Métal Moulé" is printed in the top right corner. The Metals appears again on the top, while the Wide Body is on the back above Jada's contact info. The legal information and Jada's sole logo are on the bottom of the box. The interior tray has two plastic molds capturing the ends of the car and holding the hood open, while a plastic panel with two screws hold the car down and a plastic band keeps the doors closed.

This is Jada on their game. The body is entirely diecast metal, with flexible vinyl used for the mirrors and rigid black plastic used for the grilles, spoiler, wing, and diffuser. The headlights and windows are clear plastic and the taillights are transparent red plastic. Everything fits together beautifully, easily rivaling the fit and finish of more expensive diecasts. Paint is equally excellent, kept only from earning a perfect score by a pair of small blisters on the hood and mediocre coverage inside the door jambs. Otherwise the Camaro is a uniform glossy black. The stripes are a bright, bold red that stands out nicely against the black, and the badges are the correct gold within a silver border. Once again only a tiny flaw - the stripes not quite lining up between the hood and nose - keep the trim paint from getting a perfect score.

The interior is primarily black plastic with stickers for the gauge cluster and center screen. The rear view mirror, shift lever, and pedals are cast in chrome plastic. As with the body, the casting and parts fit are superb, right down to details like the multifunction levers on the steering column and cup holders in the center console.

Newer engine bays are generally better at hiding the lack of depth common to diecast cars, and this replica follows that trend. The bay and most of the engine are black plastic, with chrome plated parts for the intake. The trunk is better than usual thanks to the way the hinges are mounted, suggesting a space that could actually hold something. While the chassis is Jada's usual simplified pan, the newer model helps as it did in the engine bay and so it looks flat but not wrong. The crossover muffler and tailpipes are made from a single large chrome-plated piece. The Camaro rides on deep-dish versions of BBS' CH-R Nürburgring Edition wheels wrapped in low-profile vinyl tires, mounted over their usual disc brakes with red calipers.

The hood, doors, and trunk all open. The trunk hinge drags a bit, but otherwise they all work fine.

As with all of Jada's "Bigtime Muscle" cars, I'm grading this on a curve: I don't expect perfectly accurate proportions or an original factory appearance, as these are meant to evoke the style more than the literal fact of these cars. In that respect, it does very well, capturing the streamlined look and smooth finish of the sixth generation Camaro. The engine is a bit weird, and appears to be the LT-1 V8 wearing the V6's hat. Going by the car's wheelbase, scale is about 1/22.

Having collected all of the black & red Camaros in Jada's classic BTM series, I was really looking forward to this release and they did not disappoint. It looks great, the fit and finish are some of Jada's best work, and it follows the feel of those older cars perfectly. Very highly recommended.