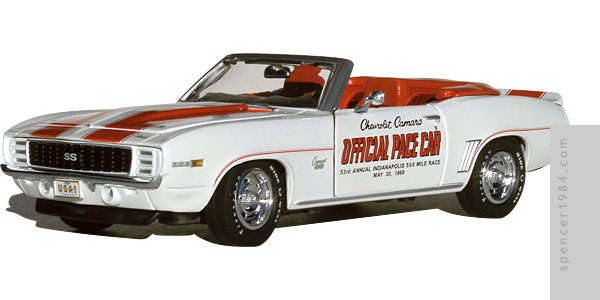 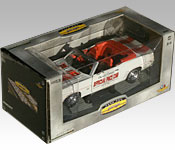 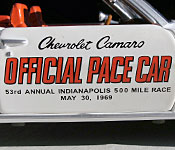 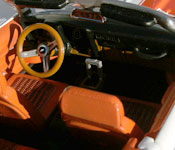 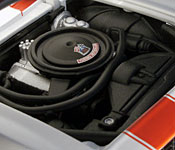 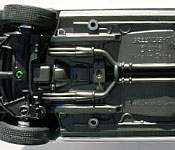 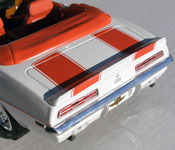 Greenlight's standard window box has a brushed metal design on the front and top of the box around the window. The Greenlight logo appears in the lower left and back right corners, while the Indianapolis Motor Speedway logo appears in the opposite corners. Centered between the GL and IMS logos is the series title, "Pace Car Garage." The scale, material, and appropriate age notices are placed discreetly around the rest of the window border. Each end of the box is black diamondplate pattern with all of the same logos and four bolt heads printed at the four corners. The back of the box has a large photo of three 1:1 pace car replicas at the track, with the Pace Car Garage banner in the top right corner. The bottom of the box has all of the legal notices, logos, etc. printed over more brushed metal. The car itself is screwed down to a plastic base with the Corvette logo printed on a blue field under the car. Two plastic blisters capture & protect the front and rear of the car, and a plastic band holds the doors shut. A plastic blister between the car and the back of the box seems to serve no purpose beyond pushing the tire off the rim; fortunately, the rim is smooth enough that nothing gets damaged and you can easily pull the tire back into position.

Each new release from Greenlight has been better than the previous, and this Camaro is a perfect example of that. The details are all sharply defined, the panel lines are tight and straight, and the paint is beautifully applied. The interior is especially nice, with features like separate window switches, a separate gear selector, and separate paint/decals on the dash for the gauges and "Camaro" script. The seats are both textured and painted, making this one of the best looking interiors in this scale (including several more expensive cars). The engine and chassis are not quite as strong, since the Camaro is not able to create depth using layered components like more modern cars. The engine has separate A/C lines and a separate air cleaner, but otherwise looks somewhat flat. The chassis fares better, and is pretty standard for this price point. A separate rear axle and separate exhaust pipes would have looked great, but Greenlight did a fair job with the one-piece casting. The only paint flaw is, unfortunately, a big one: there is a chip missing from the front center of the hood, right at the tip of the peak. It was probably caused by a too-tight fit, and mars what is otherwise a flawless finish. The driving lights, markers, taillights, and backup lights are all cast as separate clear components and fit perfectly. Chrome plated plastic is used for the bumpers, mirrors, and wheels, all other trim is done in silver paint. The tires deserve special note here, as they are some of the best looking that I have seen: no center seam, crisp lettering, and a realistic sidewall bulge really help sell the replica.

The doors & hood open, and the front wheels can be posed. They are tied to the steering wheel, but the wheel itself barely moves from lock to lock.

The Camaro has a lot of subtle features that are often hard to capture, but it appears that Greenlight pulled it off. Everything from the side creases to the pinstriping is here. Scaling looks like a good 1/24, though they did bump the wheels up to about 17" diameters.

There are several models of the '69 Camaro available on the market, but few of them can match the "curb appeal" of Greenlight's offering. The proportions look great, and at this price you can't go wrong. Just be sure to check for paint chips on the hood before you buy it if at all possible. Highly recommended.