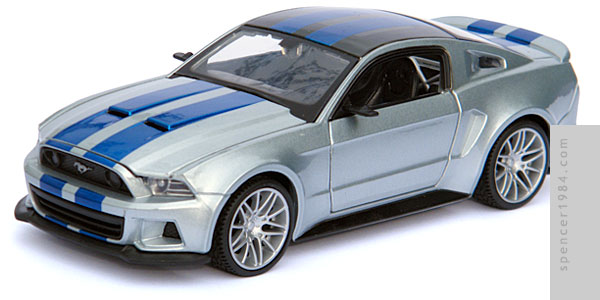 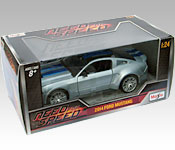 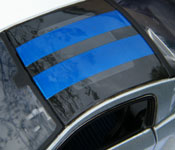 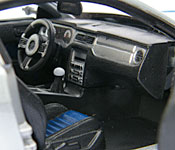 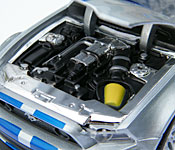 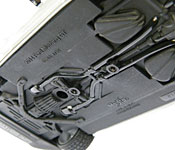 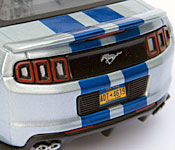 The Need for Speed franchise made the jump from video games to the big screen in early 2014 with a movie starring Aaron Paul and Dominic Cooper. Tobey Marshall (Paul) is a garage owner and former race car driver who participates in street races with his crew after hours, and Dino Brewster (Cooper) is a formal rival of Marshall's who works with exotic and performance automobiles. One day Brewster offers Marshall the once-in-a-lifetime opportunity to complete an unfinished Shelby Mustang, the last project worked on by the late Carrol Shelby. Marshall's crew get it done, earning them 25% of the Mustang's $2.7 million sale price. Brewster then bets his percentage of the deal against Marshall in a three-way race between them and Marshall's Partner Little Pete. Brewster kills Little Pete during the race, and leaves Marshall to take the fall for involuntary manslaughter. Two years later, Marshall is paroled and sets out to avenge Little Pete's death. He borrows the Mustang and sets off to enter the De Leon, a winner-take-all race in which Brewster will be competing.

The Need for Speed movie cars are packaged in a simple window box about 9" (23cm) x 4" (10.5cm) x 4.5" (12cm) with various carbon fiber designs printed as the backgrounds on all six panels. The front panel has age restriction and scale printed near the top on either side of the window. The movie title and Maisto logo are near the bottom corners, on a geometric band that forms the bottom edge of the window. "2014 Ford Mustang" is printed on a sticker placed under the lowest part of the window. The top panel has a large version of the movie title extending into the window and flanked by the Maisto logo and scale. The left flap has the Maisto and movie logos above a stylized gauge (it has numbers indicating its a speedometer, but also has a redline). The right end flap repeats the logos, but this time over an extreme close-up of a wheel. The back panel has the Maisto logo, a marketing blurb about the movie in English and French, the movie title, and the copyright information. The bottom has the remaining legal info and bar codes. The carbon fiber pattern is duplicated on all of the interior panels as well, but much lighter than on the outside of the box. The car is held to the upper of a double floor by two standard screws. A plastic band holds the doors closed, and a pair of clear stickers hold the hood closed. The NFS logo is centered on the back wall, and there is a swooping tire tread on the floor.

This was an all-new casting from Maisto, and benefits from the recent tooling. Aside from a single rough spot near the bottom left corner of the main grille, everything looks very clean and smooth. The bulk of the body is diecast metal, with black plastic used for details like the grilles, splitters (actually part of the chassis), sideview cameras, and rear fascia. Clear plastic is used for the headlights and glass, and the wheels are silver plastic with soft vinyl tires. Everything lines up nicely and fits together very well. The paint is not quite as good: the front stripes do not curve around the grille opening, and the rear stripes have some fuzzing under the spoiler. The Mustang logos are applied well, but the taillights and exhaust tips suffer from bleed. The roof, window frames, and rocker skirts are painted gloss black, and the center of the roof is painted dark gray (the movie car's roof had a glass panel). The gray is nice & sharp, but most of the black areas have some fuzzy edges. The interior is black with nicely painted blue door accents and seat inserts. The rear brace, parts of the center console, and parts of the dashboard/steering wheel are painted silver. The silver does not look as good as the blue, with fuzzy edges and some cracking on the right side of the dash. The engine is a single block of chrome plastic, with black, silver, and yellow paint detailing. It's not very deep, but the complexity of the Mustang's engine helps hide that somewhat. The chassis is also very simple, with no separate pieces and only the mufflers getting any paint.

The hood and both doors open & close. The doors are very nicely done, with the hinges located so that the doors tuck inside the front fenders when they are opened.

Maisto has done a very good job capturing the Mustang, from the custom body work to the supercharged engine. There are a few shortcuts, mostly in places that should not be solid but are (such as the roof and the rear ducts), but nothing that couldn't be fixed (or at least helped) with a little more paint. It has a screen-accurate New York ADT-4619 license plate on the rear bumper (and a movie accurate but illegal lack of a front license plate). Scaling is a good 1/24, including the 22" Forgiato Magli-ECL wheels.

This is a decent but not spectacular replica, very typical of Maisto's work in general. With a few upgrades it could be really great, but out of the box it is very average. Mildly recommended.