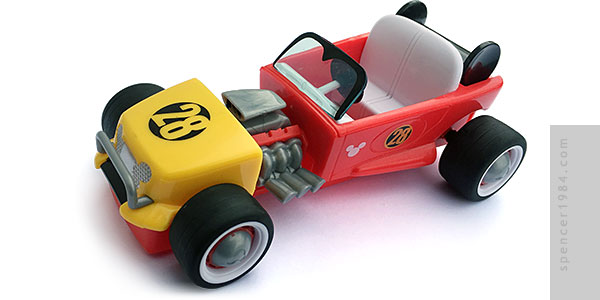 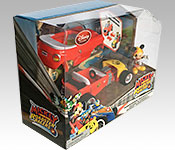 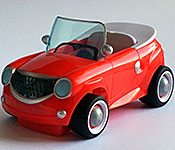 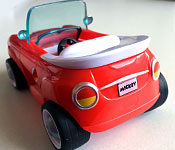 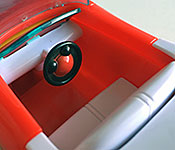 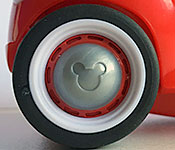 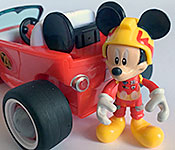 After ten years on the air, Mickey Mouse Clubhouse was replaced in January 2017 with an all-new series aimed at preschoolers, Mickey and the Roadster Racers. The new series follows the "Sensational Six"—Mickey, Minnie, Goofy, Donald, Daisy, and Pluto—as they race around the world. Each driver has a unique vehicle that converts from a street car to an open-top racer, with Mickey driving the bright red "Hot Doggin' Hot Rod."

The Roadster Racers cars are packed in a large window box, measuring 11" (28cm) x 4¾" (12cm) x 8¼" (21cm). While it's massively oversized for the car, it does allow the contents to be easily viewed through the big window. The front of the box also has a portrait of Mickey, Donald, and Goofy in their respective rides racing along a course that wraps around the left end panel. The series title and "Transforming Pullback Racer" is printed in the lower right corner. A Disney Store exclusive sticker is affixed near the top left corner. Both end flaps repeat the title, and while the contents can be removed either way it's far easier to get them out of the left side. The top and bottom are blank blue and black, respectively, and the back panel has all of the legal info below three photos that serve as the instructions for Mickey's car (see "Features/Accessories" below). Mickey and his car's parts are held to a folded tray that easily slides out of the box. Mickey and the car shell are held in place with plastic zip ties, and the racer is held with one zip tie and one wire twist tie. To save yourself time and frustration, have a set of side cutters on hand to go through all four in short order.

Since this toy is aimed at a younger audience, it is designed for robustness rather than detail. That said, it's actually a pretty decent looking little car. Modeled after the design that debuted in Mickey Mouse Clubhouse, the outer shell is three pieces: body, windshield, and convertible top boot. It's all fairly sturdy, flexible plastic, though the windshield is held in place by a pair of relatively thin pegs. Rough play could possibly snap this off, so if you're concerned you may want to remove it preemptively. The only paint used is on the lights, grille, door handles, and windshield trim—everything else is cast in color. Most of the paint apps hit their marks, but no real pains were taken to make sure the edges were precise.

The main car is where the real action is, and while it fares much better in the fun and style departments it isn't perfect. First, the good: like the roadster shell, almost everything is nicely cast in colored ABS or vinyl so the finish looks smooth and consistent. Not so good? The paint. Like the shell, it's close but not really great. This is OK for the grille and lights, but the belt drive, intake, and steering wheel are sloppy.

Also: parents may want to note that while ABS is generally a good, sturdy plastic, it doesn't do as well in thin cross-sections. The steering wheel in particular looks likely to snap off if Mickey is put in or taken out of the seat too enthusiastically.

The whole point of this series is the "transforming car" gimmick, which is a bit more complex than the three photos on the back of the box would lead you to believe. First, the easiest way to install the racer into the shell is to hold the car upside-down, put the rear in first, then gently pull the bottom edge of the front bumper to let the front of the racer drop into the body. A catch inside the shell will hold it securely, and the racer can be removed by simply pulling on the front axle while holding the shell.

To transform the racer into its final form, start by pulling the front and rear axles away from each other. This will expose the engine, which will need the exhaust tips flipped up and the supercharger pulled up. Next, the rear axle can be extended by pulling the rear wheels away from each other. Finally, pull up on the black semicircles behind the seat to reveal the rear spoiler.

Finally, a Mickey Mouse figure is included. He's dressed in his red and yellow racing uniform, and seems to have been created at a completely different factory than the car. While the car was generally cleanly cast with just a few minor paint issues, Mickey is a mess. Paint is glopped on yet still fails to cover in many areas, his body halves don't line up with each other, his helmet is askew, and it seems like his left leg is longer than his right. His ears and nose are a soft vinyl that feels ready to rip at a moment's notice. While he technically fits in the car, his joints are somehow both too floppy and yet lack the range of motion to let him sit believably.

Allowing for the realities of turning a magical CGI car into a toy, this is surprisingly pretty good. The roadster shell looks just like what Mickey has been driving for years, with the only real "tells" being the yellow inside the front fender openings and the second windshield just above the dashboard. The racer needed a few more allowances, like the simplified engine with its hinged exhaust headers and the undersized rear spoiler, but it's still quite recognizable and generally matches the animation model. In roadster form the car is approximately 3" (8cm) wide and 5¼" (13cm) long; in racer mode it's 3¾" (9.5cm) x 6" (15cm).

This is a fun little car, and the transforming feature is simple but sufficient. The only real drawback is that the Mickey figure is a waste of material, so if you're getting this get it for the car.