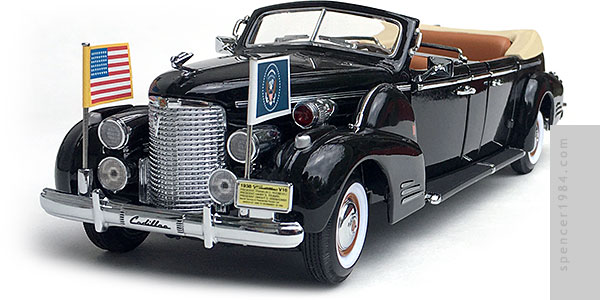 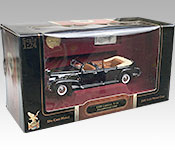 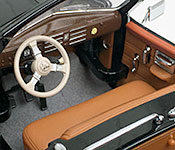 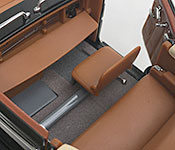 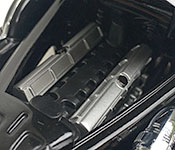 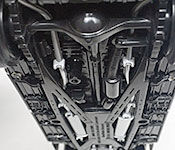 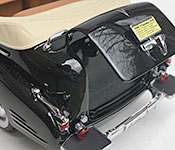 In 1938, two Cadillac convertibles, dubbed the "Queen Mary" and "Queen Elizabeth," were delivered to the U.S. government. Named after the great ocean liners of the time, the vehicles were 21.5 feet long, weighed 7,660 pounds each and were equipped with a small arsenal, two-way radios and heavy-duty generators. Durable and reliable, the two "Queens" served Presidents Franklin D. Roosevelt, Harry S. Truman and Dwight D. Eisenhower.

Yat Ming really leaned into the pomp and station of an "Executive" automobile, packing the limo in a large window box measuring 15" (380mm) x 8" (200mm) x 6¼" (160mm). The background is black with a dark woodgrain band around the center and metallic gold pinstriping. The scale and callouts for the material and included coin are printed on the front panel in gold. The Road Signature logo is in full color in the bottom left, and centered under the window is a black and gold sticker indicating which car this is. Each end flap repeats the woodgrain band and Road Signature logo, with a paragraph talking up the automobiles and diecast replicas in English (right panel), French, and German (left panel). The back and bottom panels have all the requisite legal information in all three languages, plus another sicker for the barcode and item number. Inside, a faux velvet tray in dark red holds the car, its flags, the coin, and a small instruction/data sheet. The car itself is held down with five screws, two to hold the car to a plastic base and three to hold the base to the main tray. The large window, red textured tray, and overall arrangement of parts makes fro a nice looking display piece, and the way the car is held in is both unobtrusive and easy to work with for removal and replacement of the car. It's excellent work all around.

The good work continues onto the car itself, which has a metal body with plastic details. The panels all fit tightly and give the car a nice presence, and the smooth gloss black paint looks great. Paint apps are limited to the marker lights, front fender spears, running board treads, "V-16" on each spare tire cover and trunk lid, the "Cadillac" scripts in each bumper, and the small fasteners on the cowling between the front and rear seats. The rest of the Cadillac's extensive chrome trim is all done with separate chrome plated plastic inserts, which are fit beautifully into the metal panels. Clear plastic is used for the lights and windshield, clear red for the emergency lights and taillights, and tan for the convertible top boot. The windshield has a printed chrome frame and wipers, making it an excellent match to the rest of the trim. The two flags are printed material mounted to metal poles that fit into holes behind the front bumper. A sticker is used for each license plate, a yellow museum placard listing the car and the Presidents it served.

Under the hood is a complete replica of Cadillac's venerable V-16 engine. Unlike most diecasts, this is a complete motor, allowing you to see down both sides where a set of separate exhaust headers feed the dual exhaust pipes. The valve covers are also separate parts, painted silver to recall the polished aluminum used on the original engine. Between them is Cadillac's unique valley cover and vacuum tank.

The chassis is equally complete, using a combination of cast-in and separate components to detail the giant ladder frame, front and rear suspensions, painted exhaust system, and fuel tank. The tires are hard vinyl with whitewall inserts over chrome caps with painted rims and nicely printed Cadillac crests.

Befitting the large open space afforded by the dropped top, the interior is as impressive as everything else. The seats, door panels, and other major interior components are cast in brown plastic with chrome accent pieces. The tops of the door panels are painted a slightly darker brown, and the dashboard is a still darker brown with painted trim and printed gauge faces. The steering column has cast-in levers and the steering wheel is fully painted with a printed Cadillac horn button. The rear arm rests have painted ashtrays, and behind the panel under the middle cowl is a painted arsenal with two rifles and a telephone. The floor (including the trunk liner) is flocked in medium gray, and the jump seat risers and foot rest are painted a slightly darker gray.

All four doors, the hood, and the trunk open and close smoothly. The hinges are a bit heavy all around, but considering the age and price point they're still pretty good. Steering is functional and tied to the steering wheel with a surprisingly hefty feel. Two jump seats can be unfolded from the floor and cowl just ahead of the rear bench, and above them is a fold-down panel to hide the rifles and telephone. Each of the two flags mentioned above can be inserted into either of the holes in the front bumper, though all the photos I've seen have the American flag on the right and the Presidential flag on the left. Finally, a 24K gold plated collectors' coin is packed in next to the flags and instruction/info sheet.

This appears to be a faithful representation of Roosevelt's Cadillac, from the overall stance to the small details like the 48-star flag. The few areas that have been simplified are done smartly, so that the overall look and feel of the car is still favorable. Scaling is a near-perfect 1/24.

Cadillac's V-16 was a prestige piece on its own, and the perfect centerpiece to a State automobile. Road Signature went all-out crafting this replica, and considering that it retailed at half the price of a typical Danbury or Franklin Mint car, the end result is as impressive as the original subject.