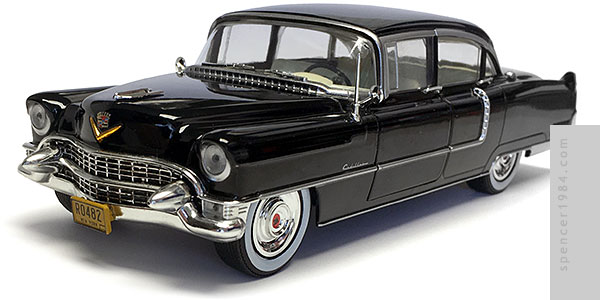 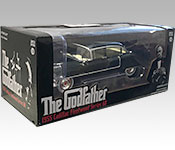 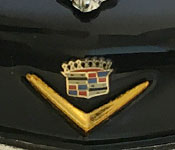 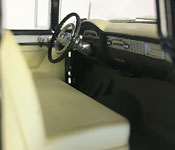 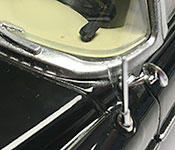 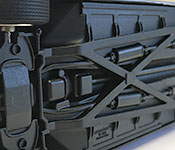 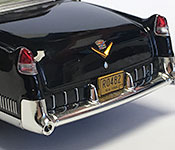 In the mid-1950s, few things spoke of status like a Cadillac. Among those, the Sixty Special was considered one of Cadillac's most luxurious vehicles, which for the 1955 model year included a 250hp V8, updated trim, and the all-new remote trunk release feature. All this for a mere $4,342 sticker price, over $300 less expensive than the 1954 model...but still more than the average annual income of $4,137 at the time. Peter Clemenza drove one of these in The Godfather and showed great respect for it, pausing a moment to wipe a spot from the fender before leaving to assassinate Victor Stracci.

As usual for GreenLight's Hollywood series, the Cadillac is in a simple window box with a unique cutout for the window and a movie-specific color scheme (in this case, solid black). GreenLight's logo, the scale, and "Limited Edition" are printed on every panel, and the movie logo on every one save the bottom. The back panel has flipped the color scheme to a white background with a blurb about the movie next to an image of Marlon Brando as don Vito Corleone done in a stark black with a single shot of red for the flower on Corleone's lapel. Inside is a red and black sleeve with ""the Godfather 🔫" repeated against a fabric-like print. The car is held in a simple folded plastic tray and requires no tools to remove or replace. As with all of my favorite packages, it works with the "less is more" design philosophy and is collector-friendly.

Most of this is GreenLight's usual good work - smooth panels, tight seams, clean paint - but I want to highlight a couple of the particularly clever bits here.

First, the front doors. In an effort to avoid the oversized window frames we saw on the Blues Brothers car, this has the metal stop at the beltline and the top of the door is made by painting the edge of the clear window piece. While this would be praiseworthy on its own, GreenLight also took the step to arrange the hinges so that the leading edges of the doors tuck into the front fenders. It's a small but nice attention to detail befitting a Cadillac.

The other detail that really caught my eye was the way the taillights were done. 1955 was the penultimate year for the "P-38" fins and their distinctive stacked lenses, and GreenLight has replicated the look with sharply cast clear parts that have the upper sections painted transparent red and delicate painted chrome bezels framing them. It would have been easy to simply plop red lenses there, or even worse simply paint the top corners of the fins red (it happens), but by taking the extra effort here they have made the whole car that much better.

In addition to the windows and taillights, clear parts are used for the headlights and parking lights. Separate chrome parts are used for the grille, bumpers, hood ornament, wipers, mirror, antenna, and door handles. The hood and trunk emblems are gold chrome, with expertly printed colors inside the shields. The rest of the trim is painted, which is a little wide around the roof but otherwise very well done. License plates are separate orange pieces with printed numbers and outlines.

Inside is a proper tricolor arrangement with gray for the floor, black for the upper door panels and dash face, and beige for the seats, lower door panels, and dash pad. Silver is used for the dash and door inserts, steering column, and horn ring. Edges are nice and sharp, with no bleed despite the complex surfaces. The details are actually a little too sharply defined, as the front door handles are three colors as they go from the trim insert across the black uppers and onto the beige lowers. Oops. the back door handles have no such problem. Two final bits of detail worth noting are the nicely printed gauge face and a separate Autronic Eye mounted on top of the dashboard.

The chassis is a single cast piece, but includes plenty of nice detailing like the bottom of the engine, body mounts, and a dual exhaust system that lines up with the outlets on the rear bumper. Wheels are chrome plastic with almost-but-not-quite centered crests and black vinyl tires with printed whitewalls.

The only feature is opening front doors. They line up pretty well and close tightly enough that a fingernail or soft plastic tool may be needed to get them open.

GreenLight has done a great job here, finding clever workarounds to the limits of mass production. Well, most of them: they couldn't get around having to fit this behemoth into their standard retail box. The '55 Caddy was 227.3" (5,773mm) long, meaning that true 1/24 scale version would be longer than the box it was supposed to fit in. On the plus side, this was the same problem promo manufacturers had back in the day, and GreenLight's Cadillac scales nicely with them at about 1/27. Internal scaling is good, without the weird license plate sizes we saw on previous cars from them. The New York RO482 confirms this as Clemenza's car.

Excellent work all around, from the overall look of the car down to the sharply printed "Cadillac" scripts on the front fenders. I wish I could be more outraged about the small scale, or the silly paint on the interior door handles, but when the overall presentation is this good it makes details like that easier to live with. Very highly recommended.