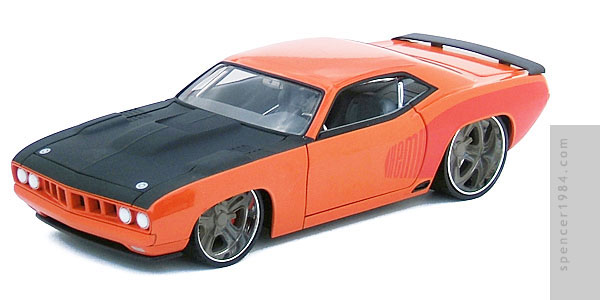 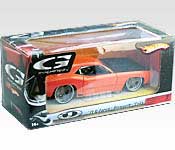 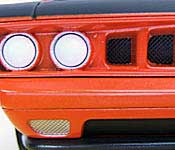 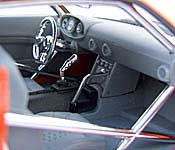 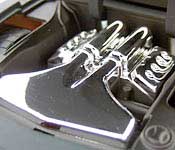 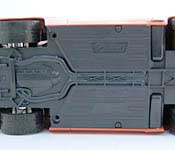 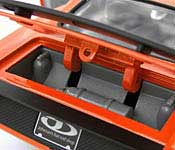 The G-Machines packaging is a dark window box with a clear panel on the front & top panels. The G-Machines logo is on the top left corner of both the front and top panels, as well as once on each end panel. The Hot Wheels logo is in the top right corner of the front and top panels, and is under the G-M logos on the end panels. The Johnson's Hot rod shop, car name, and model info are in a chrome metal flame stripe across the bottom of the front panel. An extreme close-up of a custom Mustang in front of a city skyline becomes part of the background on the left end of the box. This image is repeated on the back panel, along with a writeup about the G-Machines in general, the Barracuda specifically, and the other car in this line (a '69 Camaro). The bottom of the box has all of the legal and customer service information. Inside, the car is held to a yellow and orange cardboard tray with three thumb screws. The hood and trunk are kept closed with both plastic stretch bands and clear trays, and the doors are held closed with a wide plastic band. The thumb screws are a particularly nice touch, combining the security of regular screws with the ease-of-use seen in the Cars vehicles. The hood and trunk holds are a bit overkill, as either the trays or the bands would work fine by themselves.

The paint is nice and even, without drowning the car in clearcoat. The result looks very nice, with a fairly realistic finish and minimal orange peel. The trim is particularly well done, with some of the sharpest, cleanest work I've seen on a car in this price range. The silver trim isn't quite as nice as the black, with a little slop around the hood pins and headlight bezels - but these are relatively small areas and do not detract from the overall replica. The few graphics are also well done, and include a darker orange panel on the rear fenders moving into the word "HEMI" on the doors, "'cuda" on the rear panel, and a Johnson's Hot Rod Shop license plate. All of these are nice & crisp, with absolutely no fuzz or breaking up. The only paint op inside is a black panel on the center console, which is as clean as the black body paint. There is also a good deal of chrome inside, including the roll cage, steering wheel, shifter, and panic bar. A little more paint work could have helped here, and even more so in the trunk: the unpainted, single piece cast back there looks a bit cheap. Also detracting from the overall appearance are the painted headlights: they appear to be separate pieces, so I don't know why Mattel chose to paint them white instead of making them from clear plastic. The engine is a single piece of chrome plastic, with wires molded to the top of the valve covers.

The doors, hood, and trunk open. The hinges are all standard diecast parts, though the ones used on the hood and doors look much better than the trunk hinges. The trunk is also damaged by the band loop on the underside of the lid. Though it's nice that they thought to include an opening trunk, it would have been better if they had given it a bit more care.

Unlike Jada cars, this custom is based off of a specific rod and so can be easily checked and critiqued. Though it seems to match up to the 1:1 car pretty well, there are quite a few minor differences. First, the model appears a little shorter/squatter than the prototype. Also, the wheels are close, but noticably deeper than the ones used on the 1:1. The paint on the rear fenders/doors is darker on the diecast, and stand out more readily. The taillights also appear incorrect, with three distinct sections instead of the single-piece units used on the original. Though the inside appears correct casting-wise, the lack of paint really hurts it. Scaling is the same way: close, but not quite exact. the overall length and width scale out to about 1/23. The wheels are definitely oversized: rather than the 19" and 20" diameter wheels, these are more like 24.5" and 27.3" in diameter (if you use the above-mentioned 1/23 scale; in 1/24, they're even larger at 25.5" and 28.5").

When I first saw this in the store, I was really psyched. Unfortunately, the more I looked it over the less impressive it became. Some things I can understand and let ride with no effort: a single color interior, single piece engine, and minimal trunk/chassis detail are all understandable at this price point. What left me scratching my head are the things that Mattel went out of their way to do strangely or wrong. Why are the headlights painted opaque white? Why is there a loop on the underside of the trunk lid? Why are the wheels 35% larger than they should be? They did so well with things like the window trim, rear window tint, panel fit, and grille detail, it makes these other areas stand out more. Still, the overall piece is pretty nice, and could be truly outstanding if you're willing to add a few details yourself. Mildly recommended.