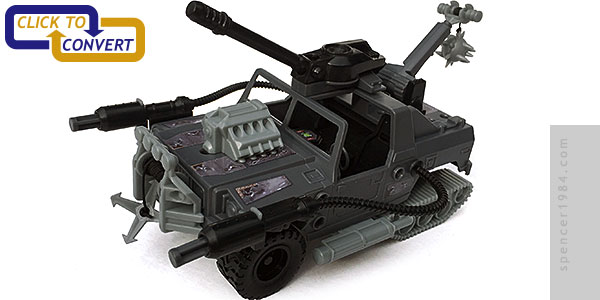 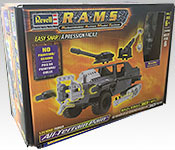 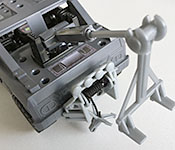 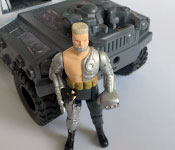 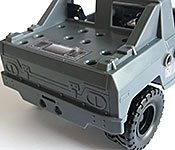 In late 2000, Revell launched an experimental series of toys in an attempt to attract new builders. The series was dubbed RAMS: Rebuildable Action Model System. A mini universe was created that pitted the RAMS Squad against the Techno-Raiders, with each side having vehicles that could be reconfigured using a modular building system. Six vehicles were launched in that first wave, with the Techno-Raiders' heavy driving a modified vehicle called the "All-Terrain Pain." The baddies didn't get much in the way of backstory, with Krusher's full bio reading "...a Techno-Raider with super human strength" and his ride "is a nightmare of total demolition."

The RAMS cars are packed in cardboard "lunch box" style packages, with a hinged lid and a plastic handle sticking out the top. The front panel has a large picture of the All-Terrain Pain in attack mode just left of center, with a cutout in the top right corner revealing the included Krusher figure. The Revell and RAMS logos are in the top left corner, just above multilingual callouts for "Easy Snap" and "No Painting/Gluing." The bottom left corner has the vehicle name under a 1/24 Scale callout. Under the figure window is a callout for his name and team affiliation. The bottom right corner claims that the All-Terrain Pain can be rebuilt "30+ ways." Both end flaps are essentially resized versions of the front panel, with the only difference being a cartoon drawing of Krusher instead of the actual figure (the figure being a little less "techno" and a little more "organic" than the drawing). The top panel has photos of the All-Terrain Pain in Undercover and Revenge modes flanking the handle, along with the series title, team affiliation, vehicle name, and a repeat of the "30+" callout. The bottom has photos of two alternate configurations, and the back has photos of the All-Terrain Pain's inventory next to co-sells for the other five vehicles in the series. Inside, all the parts are bagged and there is a separate instruction sheet, sticker sheet, and poster.

The instructions start with a spec sheet on the All-Terrain Pain, listing its driver (Krusher), top land speed (200mph), top off road speed (120mph), Armaments ("Persuader Cannon," "Titanium Tenderizer," "The Clutches," and two "Fender Fists"), and special features (Side Smoker exhaust that makes a smoke screen that creates toxic fumes that confuse enemies, and Terrain Wrecker treads that cut through heavy brush and debris). Actual instructions start on page 2 with the sticker placement guide, followed by three steps of snapping the basic truck together narrated by Krusher in English and French. The final page shows three "missions," aka alternate modes for the truck. Mission #1 is "Undercover," and has only the basic truck with none of the mount points used. Mission #2 is "Confusion," and has you adding the Persuader Cannon, Side Smokers, Fender Fists, boom assembly, and Emergency tow hitch. Mission #3 is "Revenge," which moves the cannon to the roof and adds the engine to the hood, replaces the emergency tow hitch with the Titanium Tenderizer, replaces the rear axle with the treads, and adds the grill guard referred to as "The Clutches."

While the Spy Sportster's Undercover mode had no obvious signs of its alternate configurations, the All-Terrain Pain makes no such concessions to subtlety and has the large mount points covering the front bumper, hood, sides, roof, and rear deck. It somehow still works OK, in part because the dark gray color, missing windshield, and generally rough appearance add an air of this being a salvage project. It has some nice molded-in details, including the lights, grille, hood and door seams, and the hardware holding the panels in place. The chassis is nicely detailed, with the bottom part of the engine, transmission, driveshafts, fuel tank, and exhaust pipes cast in place.

There are only two colors and no paint on the All-Terrain Pain: the gray body, and black everything else. The ties are soft vinyl, and out of the box are mounted so that the directional treads are pointing different ways on each side. They're easy to pull off and reposition to get all the tires facing the same way, though. Stickers add some interest, including battle damage to the hood and controls and seat details to the interior.

The accessories are mostly cast in light gray. A darker gray that matches the ATP's body is used for the Fender Fist plungers, the base of the turret, and the body of the boom. Black is used for the turret, Fender Fist housings, and boom base. There are functional winches on the Titanium Tenderizer (a spiked mace) and The Clutches (a four-clawed grappling hook), with black string for lines. The hoses that connect the Fender Fists to the body of the truck are stiff but flexible, somewhere between the ABS used for the parts and the vinyl used for the tires. The gray plungers inside the Fists are supposed to spring forward with the touch of a button, but the function is pretty lackluster. They look OK, though, so no great loss. The Krusher figure is basic but competent, with painted features and joints in his neck, shoulders, hips, and knees. Joints are a bit stiff after 17 years, but he can be placed in the All-Terrain Pain with some effort.

The stickers were generally good, though there are some fit issues on the hood and seats. Those who are willing to trim the stickers or those who don't care if they cross panel lines will have no problem with them.

The All-Terrain Pain resembles a HMMWV, though it has been shortened to a two-seater and most of the identifying features have been altered to avoid any legal trouble. While it is much shorter than the Humvee, the rest of its proportions are pretty good and it looks like a pretty good fit for 1/24.

Whether it's because I grew up with LEGO and Construx so I'm used to seeing visible mount points, or because I'm giving it extra leeway as a toy, or because my imagination automatically creates stories for them, the holes in the body and chassis don't bother me as much as they might. It's a neat looking vehicle with a definite "wasteland" look, and most of the accessories seem well-suited to a vehicle like this.