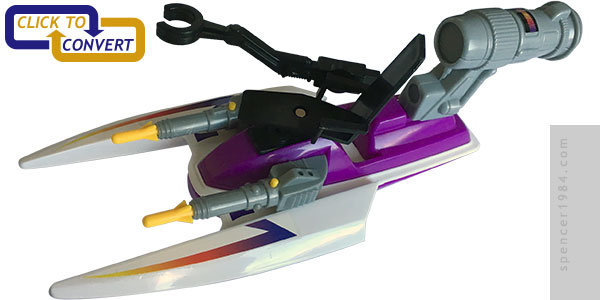 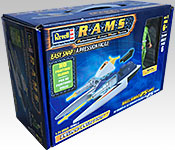 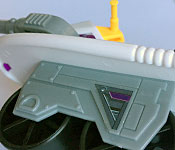 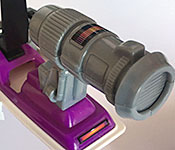 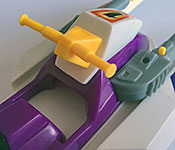 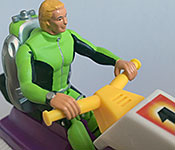 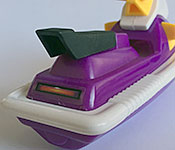 In late 2000, Revell launched an experimental series of toys in an attempt to attract new builders. The series was dubbed RAMS: Rebuildable Action Model System. A mini universe was created that pitted the RAMS Squad against the Techno-Raiders, with each side having vehicles that could be reconfigured using a modular building system. Six vehicles were launched in that first wave, with the heroes equipped with vehicles for every environment. For dealing with baddies at sea, "the fast action Wave Warrior and its driver Malibu are the best ultimate protectors of the environment. Wave Warrior [is] a mechanical marvel on land or water. Malibu is ready to respond anywhere there's trouble."

The RAMS vehicles are packed in cardboard "lunch box" style packages, with a hinged lid and a plastic handle sticking out the top. The front panel has a large picture of the Wave Warrior in Interceptor mode just left of center, with a cutout in the top right corner revealing the included Malibu figure. The Revell and RAMS logos are in the top left corner, just above multilingual callouts for "Easy Snap" and "No Painting/Gluing." The bottom left corner has the vehicle name under a 1/24 Scale callout. Under the figure window is a callout for his name and team affiliation. The bottom right corner claims that the Wave Warrior can be rebuilt "25+ ways." Both end flaps are essentially resized versions of the front panel, with the only difference being a cartoon drawing of Malibu instead of the actual figure. The top panel has photos of the Wave Warrior in Undercover and Long Range Rescue modes flanking the handle, along with the series title, team affiliation, vehicle name, and a repeat of the "25+" callout. The bottom has photos of two alternate configurations, and the back has photos of the Wave Warrior's inventory next to co-sells for the other five vehicles in the series. Inside, all the parts are bagged and there is a separate instruction sheet, sticker sheet, and poster.

The instructions start with a spec sheet on the Wave Warrior, listing its driver (Malibu), top sea speed (190mph), top land speed (70mph), Armaments (Hydro Claw Unit and two SA-5 Sea Stinger missile launchers), and special features (Hydro Roller allows travel by land, and Self-propelled Stealth Power Pack allows Malibu to cruise in the air or under the sea). Actual instructions start on page 2 with the sticker placement guide, followed by three steps of snapping the watercraft together narrated by Malibu in English and French. The final page shows three "missions," aka alternate modes for the bike. Mission #1 is "Undercover," and has only the basic jetski. Mission #2 is "Interceptor," replacing the safety bumper with the sponson, adding the missile launchers, and giving Malibu his jet backpack. Mission #3 is "Long Range Rescue," which uses the safety bumper, Hyro Roller, missile launchers, Hydro Claw unit (which really, really looks like a medical procedure chair), and Hyrda Burner.

There's not much to Wave Warrior, even by the standards set by other sets in the RAMS line: none of the modes use more than 10 parts (including missiles), and it lacks the visible engine or suspension detailing of its counterpart Vicious Cycle. What's here is competently done, with the parts snapping together snugly and lining up correctly. It's also arguably the cleanest of all the vehicles in the line, with neither hard points nor stickers suggesting its alternate modes or capabilities. The upper and lower hulls are cast in magenta ABS, the bumper and sponson are white, the seats and wheels are black, the handlebars, canards, and missiles are yellow, and the launchers, roller body, and Hydra Burner are gray.

Because the center section of the hull gets replaced between modes, Wave Warrior is less modified than reassembled when switching from one mode to another. Undercover and Interceptor are decent enough and hold together well, being essentially "civilian" and "armed" versions of the same craft. Things go off the rails for Long Range Rescue mode, though, with the inline wheels jacking it up way too high, the rear engine going up even further, and the driver looking like he's getting ready for an appointment with Orin Scrivello, DDS. It's way too tall and awkward, and the articulated arm doesn't help matters since it seems like an afterthought. It would've been smarter for Revell to have dropped that feature and gone with a lower ATV-style chassis, because this is just a mess. The Malibu figure is like most other in the series, with painted features and joints in his neck, shoulders, hips, and knees. His backpack snaps into his back easily, and he can be posed holding the handlebars. The stickers were good quality, but a couple of them had to have some of the clear border trimmed off before they would fit in their assigned places.

Wave Warrior is actually a pretty good looking jetski, as long as you assume it's a big 4-person watercraft. This would be an easier sell if the cast-in part of the seat had been painted black rather than left purple, since it looks like Malibu is sitting on a bit of engine cowling rather than the seat. Otherwise both of the basic modes look good, and with a little painting this could pretty easily pass for a traditional model.

Wave Warrior had a real uphill battle trying to get three decent modes from a personal watercraft, and they were ⅔ successful. It's the weakest of the series, but as long as you ignore Long Range Rescue mode it's still a neat little vehicle.