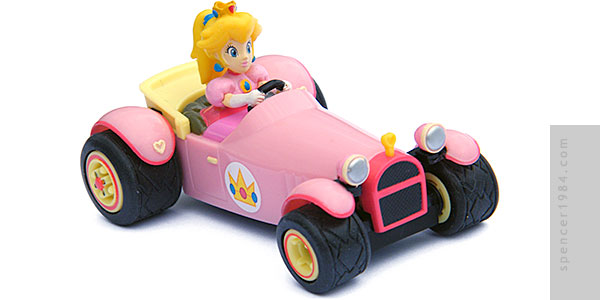 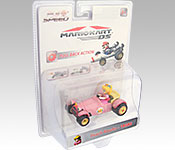 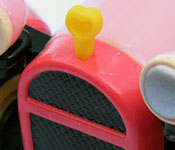 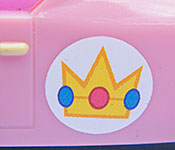 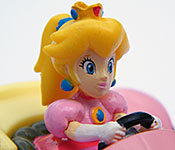 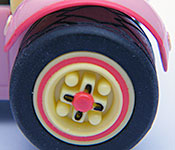 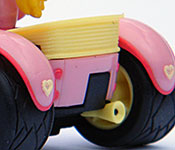 Mario Kart DS was released in 2005, the fifth game in the Mario Kart racing series and the first to feature online multiplayer as a game play option. While the playable roster continued to expand, MKDS retained the core group of Mario, Luigi, Yoshi, and Princess Peach. Peach's cars for this round included the Royale, a lightweight racer reminiscent of the Caterham 7.

This series was packaged in a sealed clam shell with a paper insert, much like how contemporary action figures were packaged. The insert has the Pull & Speed logo in the top left corner, age restriction in the top right corner, and a large image of Mario driving his B Dasher under the MarioKart DS logo and next to a "pull back action" callout and graphics. The back of the insert consists almost exclusively of black legal text on a plain white background. Only the age restriction and logos for Staslbauer and Geprüfte Sicherheit have any color. A sticker across the front of the blister has a picture of the princess and the text "Peach Royale - 19303." The Royale is nested in a single clear plastic tray. Getting into it is no easier here than anywhere else, with the only option being destruction of the package with a sharp tool to get the car out. In short it's not very pretty, but very good at keeping the contents safe.

For such an inexpensive toy, this is surprisingly well done. The body is smooth and nicely cast, the assembly work is very clean, and everything generally fits together tightly. The only rough edge I see is on the underside of the radiator shell, and the only parting seams are low on the trailing edges of the four fenders and along the sides of the hood—all of which are very faint. Peach's skirt is molded as part of the car, but her torso/head and arms/steering wheel are separate pieces cast in softer plastic. All four four wheels are cast in yellow plastic with red and black paint detailing and rubber tires: the front two suffer somewhat from their snap-on mounts, and one tire has a faint molding error across the tread, but otherwise these look good. The body, fenders, and headlights have been cast in pink and then given a coat of either gloss pink or gloss clear. The radiator shell, fender trim, and taillights are painted a much darker pink. Pale yellow paint is used for the fender hearts and headlight bezels, a close but not exact match to the yellow plastic used for the hood ornament, wheels, roof, and tailpipe. The headlight lenses are silver. The grille, front fender/headlight mounts, and center of the tailpipe are black. Peach's symbol is printed on both sides of the body, and while the colors and registration are great there is a small nick near the bottom left of the left side symbol. The rest of the paint is excellent, with no sign of errors and nice alignment (particularly on the fender edges). The chassis is cast in black plastic, which is also visible just behind the front wheels, the rear, and both axles. The interior, such as it is, has a brown seat and a dark pink dashboard. Peach's skirt fills the rest with a matching and slightly lighter pink. Her top very nearly matches the bodywork of the Royale, and she is wearing her trademark white gloves, blue earrings, and gold crown. Her hair was restyled into a ponytail starting with Mario Kart Double Dash, and is the style she has here. Her paint isn't quite as good as the car, though her eyes are printed so they look nice and sharp.

The big feature here is the pull-back motor. It works well enough, with just a 1" (2.5cm) pull getting more than a foot (30cm) of forward movement. Better still, it doesn't interfere with the mold at all.

Having Peach in the driver's seat certainly seals the deal, but even without her there the Royale is still immediately recognizable. Only a few sacrifices have been made in the name of ruggedness, such as the way the headlights are mounted, but thanks to some clever paint apps and good construction these flaws very nearly disappear. Even the tires have the correct "stacked diamond" tread pattern. The scale is officially listed as 1/43, but that really refers to the Carrera slot car tracks these were designed to go with. Unless Peach is suffering from Magic Mushroom Gigantism and brought her car with her, the actual scale is somewhere in the 1/24 - 1/32 range.

Although not a terribly complex item, this is a fun little car that can easily be picked up for $5 or less. It looks good, has a silly but unobtrusive feature, and fits well with others in the series. If you're a fan of the MarioKart games, it's absolutely worth getting.