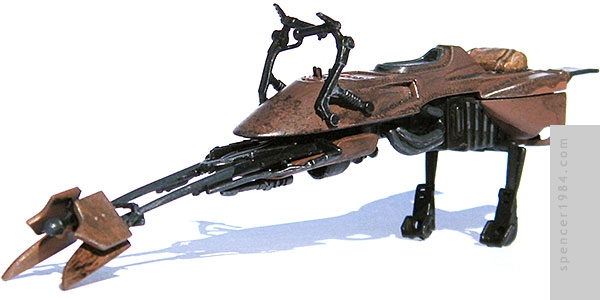 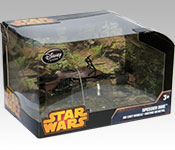 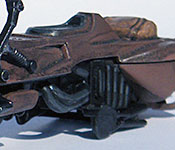 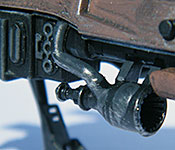 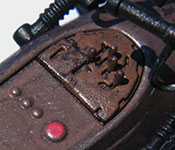 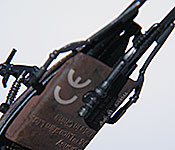 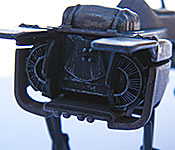 Most of the Galactic Empire's materiel was based on the "more is more" approach, building the largest, strongest, most powerful weapons possible to enter any battle with a distinct psychological advantage. But certain missions require speed and maneuverability over raw power, including the mission on the forest moon of Endor in Star Wars Episode VI: Return of the Jedi. It was there that audiences first saw the now iconic Speeder Bikes: fast, lightweight repulsorlift vehicles used by Scout Troopers to patrol and guard the defense shield protecting the second Death Star.

The package or Disney's Star Wars vehicles is a rectangular box, approximately 6½" (16.5cm) x 4¼"" (10.5cm) x 4" (10cm), with a truncated top edge. A large window makes up the bulk of the front, top, and opposite end panel. The rest of the box is a plain black background. The front panel has a gold Star Wars logo in the bottom left corner, "3+/Speeder Bike™/Diecast Vehicle · Voiture en Metal" in the bottom right corner, and a Disney Store sticker on the window in the top left corner. The Star Wars and Disney Store logos are repeated on the window end, though both are printed as part of the package this time. The opposite end flap and top panel only have the Star Wars logo. The back panel has all of the legal and contact information written in white, along with a single red element creating the circle-with-slash symbol in the age restriction. The price tag and bar code are a sticker near the bottom right corner, and another sticker—this one showing the movie logo and line art of the titular character from Alice in Wonderland—is on the otherwise blank bottom panel. Inside is a folded tray portraying the forest moon of Endor, and the Speeder Bike is tied to a clear plastic tray with a single wire twist tie. The package looks nice overall, but unfortunately due to the soft materials that make up the bike's outriggers and lack of support within the package, the front of the bike is pretty much guaranteed to have sagged by the time you get it. It's possible to reseat the bike if you remove it, but the way it's balanced and secured make this more of a hassle than it's worth: just plan on leaving it out of the package if you remove it.

The outriggers are the most obvious victim of soft plastic here, but the hand controls also suffer from sagging and the resulting misalignment. It's especially unfortunate here because most of the casting is very good, they just chose the wrong materials to use (those who collect Spawn figures will remember McFarlane Toys going through a similar inability to use the right material for the weight of their sculpts). The cowling and engine are made of diecast metal, while the engine details and foot controls are made of a harder plastic. The detail work is generally very nice, including some fine work around the control panel and exhaust ports. There does appear to be an assembly error on my bike, with the gap between the upper and lower cowling being too wide. Paint is excellent, with good base colors and lots of weathering to make it look like it has seen plenty of use. A few details have been simplified, such as the wires connected to the foot controls and the hoses on the port side of the engine, but noting that detracts from the overall look of the craft.

There are two features: the ventral blaster cannon can be rotated, and the foot controls can be swung to different positions. Both are failures, though. The blaster cannon feature was unnecessary since to the best of my knowledge these were supposed to be fixed to fire forward only, and the foot controls are far too loose and end up flopping about or falling off entirely.

Comparing this to photos of the props and high-end collectibles, it looks like they got the detailing just about as perfect as possible at this price point. From the open slats in the foot controls to the thumb triggers on the handlebars, everything here follows the prototype. Even some less-than-obvious details, like the control arms going to the steering vanes, is nicely captured. The 74-Z is listed as being either 3m long (according to Star Wars: Behind the Magic), 4.4m long (according to The New Essential Guide to Vehicles and Vessels), or 4.9m long (according to Arms & Equipment Guide). This bike measures 13.5cm, making it 1/22, 1/33, or 1/36 scale.

If not for the use of soft, saggy plastic and oversized parts gap, this would be an absolute winner. Even so it's still very nice, with sharp detailing and good paint work. Mildly recommended.