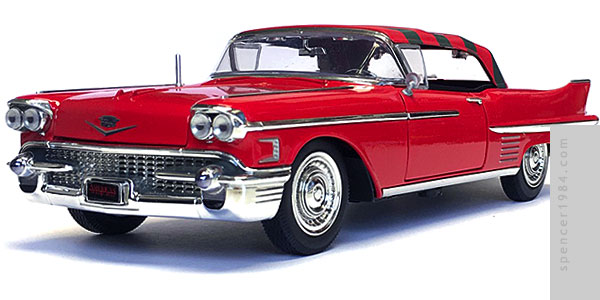 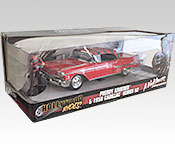 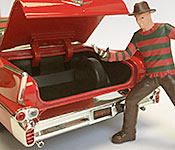 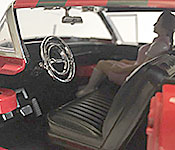 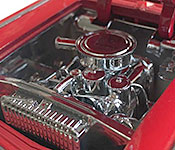 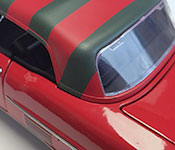 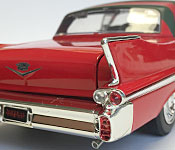 The origin for A Nightmare on Elm Street was a convergence of chance encounters in Wes Craven's life: the general story was inspired by a series of newspaper articles printed in the Los Angeles Times, detailing the deaths of several Southeast Asian refugees who, after fleeing to the United States, suffered disturbing nightmares before dying in their sleep soon after (a phenomenon dubbed "Asian Death Syndrome" by medical authorities). The villain was a combination of a bully from Craven's childhood, wearing colors that were intentionally clashing based on a n article he had seen in Scientific American. Freddy's glove was inspired by Craven's cat, who was sharpening its claws on the furniture one evening in a gesture that clicked with Craven's desire to have a simple, easily-recognizable, and primal weapon to give his new monster.

This is part of Jada's Hollywood Rides series, packed in their standard box. The text under the main window has been updated to "Freddy Krueger & 1958 Cadillac Series 62," Freddy's gloved hand and the Elm Street sign are at the right side of the front panel next to the window, and the movie title is in the bottom right corner and on both end flaps. The back panel has a large photo of the car and figure above the multilingual instructions. Inside is a dirty white background and floating gloved hand near the front of the car, which is held in place via two screws and plastic bands around the hood and doors keep them closed. A plastic tray around the rear of the car keeps the trunk closed. Freddy is screwed to the base near the front of the car.

Jada has done an excellent job here, with a smooth casting and tight, sharp panel lines. The main body, doors, hood, and trunk lid are all diecast, giving the car some serious heft. The bumpers, grille, headlight bezels, fender spears, windshield frame, door handles, rockers, fin trim, and taillight bezels are chrome-plated plastic; the antenna and sideview mirror are softer vinyl; the convertible top is red-and-green painted black plastic; and the lights and windows (including actual wing windows!) are clear plastic, with the outer rear lights tinted red. Most of the work here is very good, though there is a rough spot in the chrome plating at the inner right corner of the rear bumper and one of the green stripes on the top "skips" at the raised seam. The red used on the main body has a bit of orange peel on the large flat surfaces, but coverage is excellent and there are no drips or other flaws. Silver paint is used for the smaller fender trim details, and the hood and trunk emblems are printed silver and black parts. The Dagmars look like they have a black wash on them, but the result is a black chrome look rather than a rubber covering. For some reason, the ends of the rear bumper are painted red as if they were extra taillights. Not only is the color wonky, it's one of the few places where Jada really missed their target and red paint has been slopped onto the edge of the bumper. The license plates are small black stickers with red lettering that reads "AMERICAN HOᴙRoᴙ ᴙIDES," suggesting more vehicles planned in this series.

Under the hood is a chrome V8 with excellent detail work. The air cleaner may be the only separate part, but other details like the power steering pump, generator, oil filter, vapor canister, and ignition wires (a first from Jada) are all present. The radiator and bulkhead is a separate piece, and has a nicely detailed tank with cap and overflow line opposite a full fan shroud. This is really nice work overall, and shows what can be done even using just a few parts.

The interior is similarly simple but smart, cast in black plastic with separate chrome steering wheel and pedals. The sun visors and rear view mirror are cast as part of the windshield frame, and also are also chrome plated plastic. There are pleats in the seats and door panels, plus enough details on the dashboard to keep it from looking too plain. Inside the trunk is a cast-in spare tire and the outlines of the inner rear fenders, putting it one up on Jada's usual "featureless black box" trunk space. Finally, the chassis has some basic but recognizable detailing, including the chassis rails, suspension components, and exhaust system with separate chrome tips. The wheels are stock Caddy hubcaps in chrome plastic and blackwall tires in vinyl.

The hood, doors, and trunk open on nice stiff joints that hold their positions and fit nicely when closed. Also included are 1/24 scale figures of Freddy Krueger and Nancy Thompson. Freddy is standing in a vaguely menacing pose, forward on his right foot with his glove in a clutching gesture. Nancy is seated in the Cadillac's passenger's seat, hands on her lap and staring straight ahead. The casting work on both is passable - Freddy's claws are obviously way too thick since properly scaled claws would be a disaster on a mass-produced figure like this, but otherwise they got some really nice details like the frayed edge of his shirt or her seater vest-and-shorts look from the final scene of the movie. The paint is less good, though considering the realities of manufacturing it's good enough. A skilled painted could really make both of these pop.

Pretty solid work on the accuracy front. The top of the grille surround should be part of the hood rather than the bumper (a detail they got correct way back on their '57 Chevy), and several bits of chromer were left unpainted/plated, but really nothing major. The only real mistake I see is the ribs behind the doors: there are five on each side, while the movie car only had three. Again, tiny details that in no way harm the overall look of the car. It's also worth noting that the Freddy figure has striped sleeves - in the first movie, they were solid red. Scaling is pretty dead-on to 1/24.

This is Jada on their game: clean casting, good proportions, solid paint and detail work. Not only is it a great addition to a Hollywood car collection, it is a good replica of a too-often overlooked Cadillac. Very highly recommended.