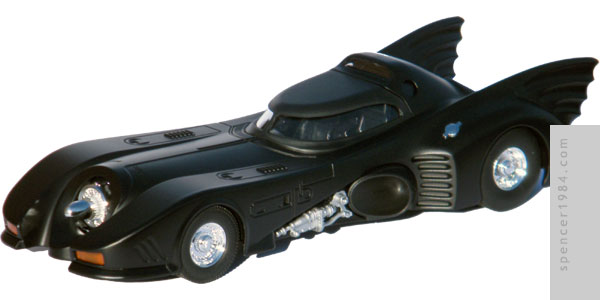 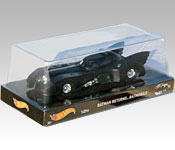 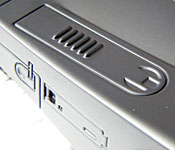 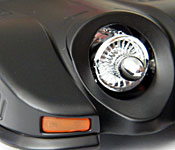 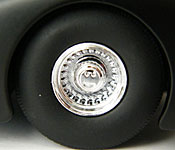 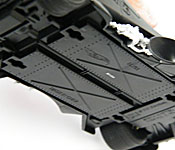 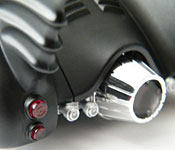 After the success of 1989's Batman, Warner Brothers followed up in 1992 with Batman Returns. Unlike the later films, Returns was set very firmly in the universe established in the first film, with many of the same principals and a very similar aesthetic. Part of that continuity included the Batmobile, which received only minor alterations.

Hot Wheels' Heritage series of Batmobiles comes in a "fishbowl" style package measuring 10½" (27cm) x 5½" (14cm) x 4¾" (12cm). The top 3½" (8.5cm) is slightly narrower than the base, with tapered sides, a flat top with a slightly raised rim, and rounded vertical corners. The plastic that makes up this dome bulges out around and underneath the tray, with a flap that folds underneath to completely surround the car and its base. The base is made out of hefty cardboard, entirely black except for the Hot Wheels Logos (all four sides), the scale, "Batman Returns Batmobile," and movie's "frost" logo (long sides only), and "Made in China" in several languages (one short end only). The legal information, bar code, contact information, and additional licensed logos are all printed on the bottom of the base. To access the car, you need to tear out the perforated bottom center of the tray, and twist four tabs that key into the bottom of the car and hold it in place. As a display piece this looks quite nice, and it is possible to put things back together for storage, but it's a shame that there is no way to remove the car without destroying part of the box. Mattel has done better in the past, so I know they're capable of better...this was just a poor decision.

Most of the body is cast as a single piece of metal, though some of the extreme contours of the car were accomplised with multiple pieces. This means there are some extra break lines around the front air dam, and more at the edges of the side coves. There is also a very noticable mold separation line right in the middle of te rear deck, and some fainter lines around the tailfin scallops. Otherwise the casting looks very good, with decent detailing and clean panel lines. Several textured areas, like the side intakes, non-skid plates, and gun door vents, are outlined but otherwise featureless. The cockpit canopy and side coves are plastic, painted to match the metal body. The headlights are transparent orange plastic, the windshield and opera windows are transparent clear, and the taillights are transparent red. The turbine intake, wheels, fuel caps, and exhaust are bright chrome plated, and the side detailing and rear nozzles are matte silver. These plastic pieces mostly look great, with generally sharp detailing and no casting errors. The only problems with any of these are the "bridges" between many of the components. Mattel really should have made the effort to cast these differently, so that the side details weren't so obviously made from a single piece and the roof scoop wasn't blocked by a clear panel. The interior has only the most basic detailing: the dashboard is totally blank, nothing is painted, and the body's assembly pins are visible in the foot wells. The narrow windows and solid black coloring help, but do not hide this oversimplification. The chassis has some suspension and jet detailing, but is primarily a set of heavily armored panels. Every replica of this Batmobile gets to do their own take on the chassis, and this is actually a pretty cool take (though it does create an accuracy problem, see below).

The Batmobile has rolling wheels only.

The overall shape of the Batmobile looks great. It has the right stance, and the general proportions look spot-on. Unfortunately, everything else is pretty much wrong. The first major problem is the color: it was only matte in the first movie, but had been repainted gloss black for the sequel. and neither movie used bright chrome for the intake, wheels, or exhaust. The headlights are also wrong, and should be yellow instead of orange. Since they specifically refer to this as the car from Returns, they also missed the wipers and rotating foot pad that were specific to that movie car. The side intakes have the correct tapered inners, but are closed off so close to the surface that it hurts the illusion. Finally, the scaling isn't even close: this is closer to 1/31 than 1/24 scale.

It's too bad that Mattel chose the path they did, because there is an awesome replica buried in all this mediocrity. The ridiculous scaling is clearly a cost-cutting move, since there's plenty of room in the package for something closer to accurate (or even closer to the TV car). Oversimplifying the interior, side details, and glass (really? a solid clear blank over the roof scoop?) further express how too many corners were cut getting this into production. The paint, chrome plating, and lack of movie-accurate details were all self-inflicted errors that could have been avoided by not advertising this as a specific car from a specific movie. If you really want a 1/24 version of this car, get the one Mattel released a few years back as part of their 1/18 series. The details are a lot better, and thanks to Mattel's underscaling that "1/18" actually worked out to be more like 1/22.