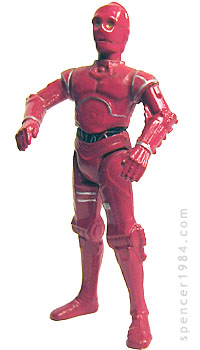 I was caught off-gaurd by the amount of work I had to do on this figure. I was under the (mistaken) impression that the goop on C-3PO was paint, like the C-3PO with Realistic Metalized Body and Cargo Net figure. I then found out that it was molded into the vinyl figure, and unless I wanted a dirty Protocol droid, I was going to have to cut it off.

Since none of the Protocol droids I intended to recreate were in a food fight, I opted to try to remove the extra material. Using a new X-Acto blade, I cut the figure to the contours of other 3POs. After that, the rest of the customizing was pretty straightforward. The main body is red with silver accents, and weathering was done with charcoal.