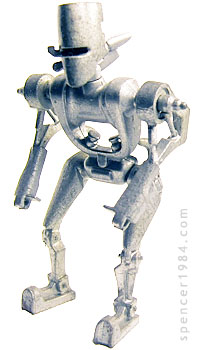 I got another ASP-7 labor droid as part of a trade deal, and wanted to try to better represent the droid that appeared in the extra Star Wars: ANH footage. In the movie, the droid appears to be a shiny metallic color, altough somewhat abused. To do this, I took the ASP and painted it with several layers of paint, including mixing lacquers and enamels, until I got the right effect of blistered metal plating. The final coat is mostly Rust-Oleum Chrome with some flat black details.