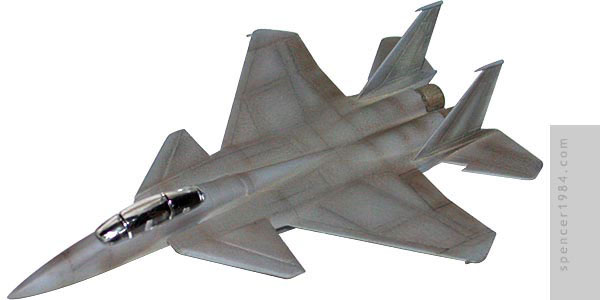 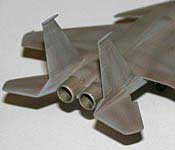 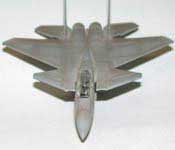 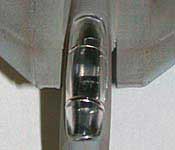 I originally based this model on a picture that used to be on Dale Brown's web site (the now long gone www.megafortress.com) instead the cover art for Day of the Cheetah. I always thought the wider canards fit the look of the F-15 better, and since it was never specifically mentioned in the text, I was free to go with my preference.

Vertical stabilizers from ARII's 1/100 Macross VF-1 Valkyrie were cut down to the appropriate size to make the canards. This required multiple test-fits along with very slowly carving the bottom edge of the Valkyrie's rudders until they could be mated with the sides of the F-15's fuselage. Because the F-15 model had no cockpit detail, I also used the two-seat cockpit from the Valkyrie kit, cut and modified to fit into the nose of the smaller scale aircraft. The landing gear was made with a combination of kit-based and scratchbuilt elements, and the aircraft will sit properly on all three wheels because of a small lead weight glued inside the nose cone (otherwise, it has a tendency to tip backwards).

Painting and assembling the aircraft had to be done in two steps. First, I assembled everything but left the nose/cockpit section separate from the main fuselage so that I could paint between the intakes and around the rear section of the nose/cockpit. Then the two main pieces were assembled and the joints were filled in so the aircraft could be painted as a whole. The primary color is Testor's Gloss Gray with Testor's Steel for the engines.

Though the overall look of the "finished" jet at this point was acceptable, it didn't feel right. The numerous experiments, retrofits, and upgrades had left the Cheetah looking much more used than what I had originally built. I eventually decided to revisit the model and correct it to what I thought it should look like. I removed the canopy, masked off the cockpit, and refinished it with Dullcote and various weathering techniques to accent the panel lines and give it a more used look. I also took the opportunity to finish the canopy with thin strips of Bare Metal Foil before reassembly.