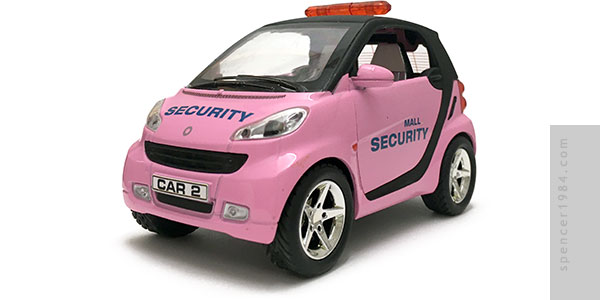 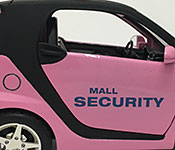 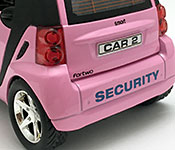 Ah, Mall Monkeys. Created by Eric Drobile, Keith Smith, and Rob Weyman, the strip ran for a little over a year in 2002-2003 but garnered a dedicated fan base in that short time. It was bizarre, rude, and entirely part of that moment in history...but for those of us who were the right age in that moment, it really, really worked. About the only thing it lacked was any real vehicular action, so despite my enjoyment of the strip it never got the place in my collection I thought it deserved. Then I realized that since the titular mall had its own security force (in the character of Sarge), it also ought to have one or two security cars.

What kind of car to use had me hung up for a while. Maisto had a Ford Escape that was the right vintage and was frequently used for mall security cars, but that didn't feel right. I needed to go with something more outlandish, maybe Revell's Ford Expedition? A Hummer? Something completely unsuitable? Nothing felt quite right, and I suddenly realized I was going in the wrong direction. An over-the-top muscle machine seems ludicrous to me, but would be acceptable if not preferred by someone like Sarge. I needed to go the other direction.

I actually like commuter cars, and they're ideally suited to civil enforcement where something efficient and nimble is more important than some hulking monster. But Sarge wouldn't. He'd hate the small, unthreatening nature of the car, and he'd hate how he'd look in it. The only thing worse would be if it was painted pink. One quick trip to eBay, and I had the base for my security car.

Once I had the car, it only needed a few details. I cleaned up the edges where black met pink, made a set of decals for the doors, hood, and rear bumper, made a set of license plates, and gave it a roof light. For this last item I took the light bar from Jada's 1/32 scale Stranger Things Blazer, stripped off the red and blue coloring, and redid it in orange.