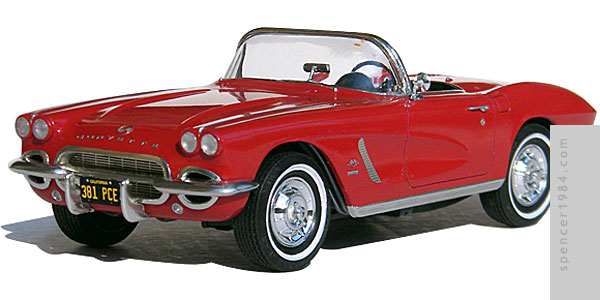 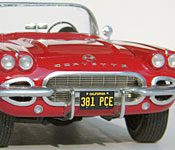 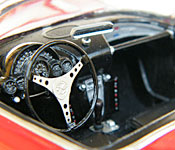 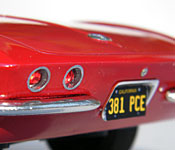 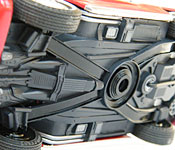 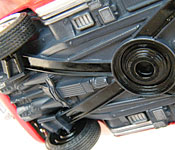 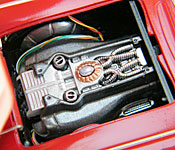 I had bought this kit a few years ago, when Walmart was carrying then-current models for $5 each. It wasn't a great kit, and I didn't have a particularly strong idea for it, so it waited until Agents of S.H.I.E.L.D. caught my attention, and made me want a replica of Agent Coulson's beloved classic Corvette "Lola." By this point, Revell had released their far superior '62 Corvette kit, but knowing how many modifications I would be making I decided to stick with the AMT release.

My first job was to fix the front end. This was in part because the too-small headlights were one of the most blatantly wrong features of the kit, so I thought if I could fix those the rest of the kit would be relatively easy. I shaved the cast-in bezels flush with the front fascia, and replaced them with a set from an AMT 1959/60 Corvette. These were drilled out, and smoothed into the body. Once those were done, I saw that the overall front was too tall, and removed a scale 1" - 2" from the top of the lower pan.

The rest of the body received the usual cleanup and deepened panel lines. Once finished, it was painted Tamiya TS-8 red and given a polishing and clearcoat. Repairing the casting errors with the bumpers and grille destroyed the plating, so everything was refinished with BMF and details from the Model Car Garage's PE set. Other details, such as the sideview mirror and headlight lenses, came from my parts box.

The interior was built nearly sock, with the addition of more MCG details, a scratchbuilt switch panel, and a modern shift lever. It was then painted gloss and semi-gloss black and flocked.

The chassis received the most work. I started by cutting out everything between the frame rails, and replacing it with a section of flat styrene. I then scratch built Lola's "flying car" chassis from styrene stock, bits of other kits, and some parts from a Hot Wheels car. Everything was then painted dark gray, detailed with metal colors, and sprayed with a coat of Transparent Black Window Tint to give it the proper look. The tires came from my parts box, and were mounted on wheels from Revell's '58 Corvette.

Lola's engine has yet to be shown, so I decided to make up my own "Stark Industries" powerplant. It was made much the same way as the chassis, using a Hot Wheels car for the main body and accessorizing it with plastic, wire, and bits from my parts box. It was painted dark gray, and the primary intake was painted black so it would not be obvious when viewed through the grille.