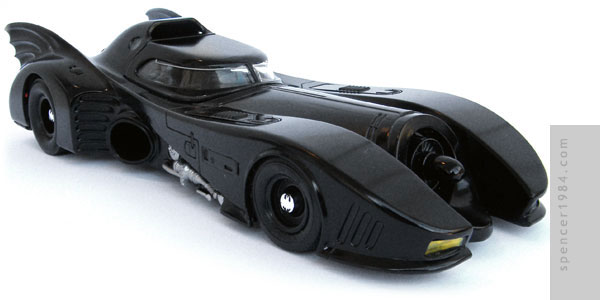 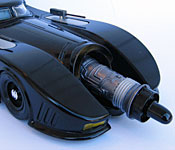 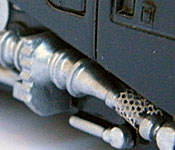 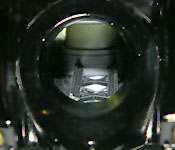 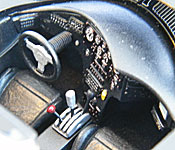 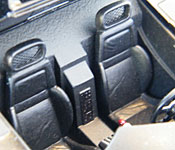 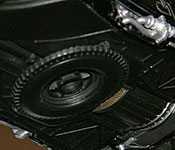 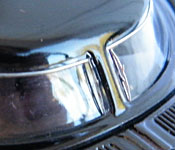 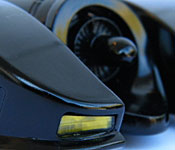 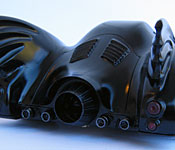 Before starting work on this model, I made plans on how I wanted it to differ from the Batman Batmobile. The color was the single biggest change between movies, but several small details were added for the sequel. I wanted to include as many of these as possible, including the pull-out engine AMT added for the reissue of the kit in 1992.

Work started with the cockpit. I opened the headrests and added wire mesh to the openings, scratchbuilt a CD player for under the right side of the dashboard, added carpeting, and altered the steering column to match what appeared on at least one of the stunt cars. The mixture lever was lost somewhere—this was a 20+ year old kit, after all—and so I made a new one. All of the chrome parts were stripped and repainted, and the dashboard was painted to nearly match the '89 car (the monitor screen was colored gray rather than green to reflect updated technology)

Although the pull-out engine was a nice addition, the only thing that had been added inside the body was a set of rails to support the engine. This meant that once the engine was removed, you were left with a hollow shell. To improve on this, I built a more proper inner chassis from parts of a stock car, some styrene rod, and bits from my parts box. I also added dual front shock absorbers, retracted shinbreakers, and a central column for the lifting foot pad. The pad itself was made from a plastic truck tire that was recessed into the underside of the chassis. Because of the extra internal detailing, I had to shorten the engine but otherwise completed it as per the instructions. Everything was then painted using various metallic colors.

The inner fins were installed and filled, and a set of tapered intakes were scratchbuilt from sheet styrene. The body was then painted Tamiya TS-14, which had the right sheen for the Returns car straight out of the can. This included the wheels (the center hubs were masked off first), side intake bezels, rear nozzles, and intake. The primary exhaust and nozzle tips were painted gunmetal, and the side details were painted flat silver. The wipers were customized from a set of aftermarket PE pieces and wire, the anti-skid treads on top of the side intakes were made from sandpaper, and the heat shields around the side details were cut from an old electric shaver head. The headlights were tinted yellow and backed with a set of headlight graphics left over from the A-Team van build.

Although they were never used in Batman Returns, I left the machine gun doors loose on this build so that I can pose it with the '89's guns in place.