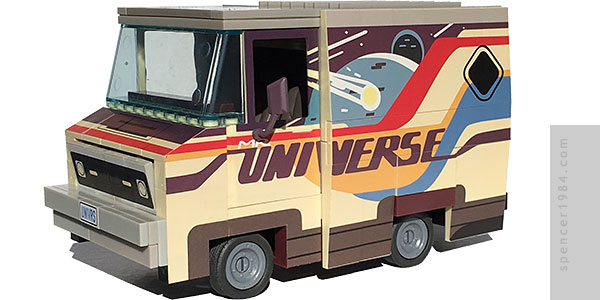 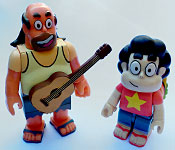 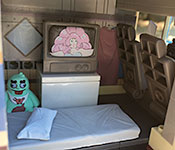 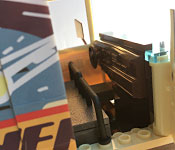 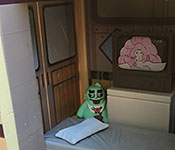 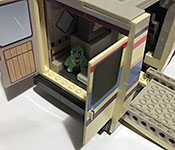 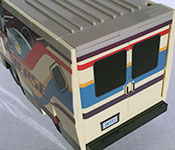 The first vehicle after the conclusion of McFarlane's Walking Dead series, Greg's van from Steven Universe was a more ambitious attempt than anything that had come before with a full interior, contoured sides, and the ability to hold two figures. While the effort definitely deserves applause, the execution isn't quite there this time.

The first problem happens during the assembly, and comes with the slight variations of colors and trying to pick out which is which. At one end of the spectrum there are parts cast in dark gray, dark brown, cranberry, and black. At the other end: white, light gray, lighter gray, and beige. It's tough enough trying to tell one from another thanks to the slight color variations in the plastic, but when the instructions pick a color that could be one of several, it becomes nearly impossible to get things right. It took me over an hour to build this set, thanks to the multiple times I had to go back and undo an assembly once I discovered that I had used light gray instead of lighter gray. Having a parts bagging system like what LEGO uses, where sub-assemblies are grouped together, would help a lot.

Next, stickers. I personally don't mind stickers, and McFarlane has done a really nice job with sizing these to fit the van. The printing is also nice, with sharp edges and nice bright colors. The fender spats don't quite match the color of plastic used over the rear wheel openings, but it's pretty close. So if they're so good, what's the problem? The sheer number of them. Both sides of the van are covered—rocker to drip rail and bumper to bumper—with eight stickers on one side and 14 on the other. The interior walls are also covered in stickers, and the hood, grille, and front license plate are each another separate sticker. Getting them lined up, matched panel to panel, and pressed down was tiring for me, and I did the decal work on this. A younger or less patient builder is going to have a rough time with these.

Finally, the finished product just doesn't quite live up to the high bar set by Dale's RV. While vans are indeed boxy, this goes so far as to look less like a custom full-sized van and more like an ice cream truck. Whether this bothers you depends a lot on your expectations, since the finished piece is fun and gets the general point across.

I really wanted to like this set, and it does have some really fun elements. The figures of Greg and Steven are great, with nice castings, good paint, and fun accessories (a guitar for Greg, and a backpack for Steven). The inside of the van has some great details like the mattress and pillow, and the way the TV set is constructed is nearly brilliant. Lots and lots of excellent details all around, but the van itself just isn't quite there.