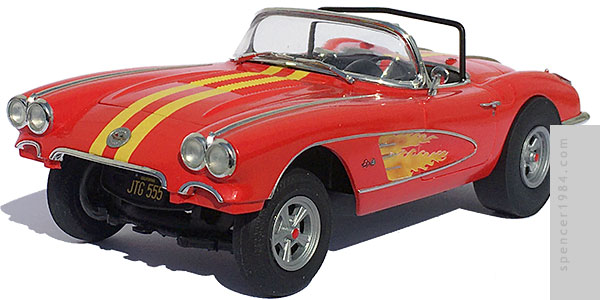 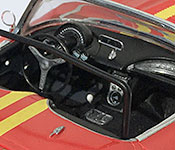 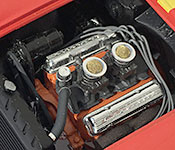 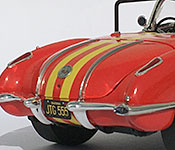 Hot Rods to Hell didn't exactly take the straightest road from concept to completion. Based on the 1956 Saturday Evening Post short story "Fifty-Two Miles to Terror" by Alex Gaby, that remained the film's working title until it was changed to become part of Warner Brothers' "Hot Rod" universe (including the previously-released Hot Rod, Hot Rod Gang, and Hot Rod Girl). Filming was done with plans for it to be a TV movie, until production wrapped and the producers decided it was more appropriate for theatrical release. This release clocked in at 92 minutes, which remained the standard release of the film until ABC-TV acquired the broadcast rights and a 100-minute print of the film. Fittingly, then, my build of the titular car started with the purchase of a glue bomb '58 Corvette I found on eBay.

Actually, it was less of a "glue bomb" than a "paint bomb." The previous owner had applied the colors so thick that many of the fine details were obliterated. I started by disassembling as much as I could, leaving only the engine since it was glued too heavily to pop apart without damaging things. I sanded off the rough spots and squared it up as much as possible, then repainted it orange with a steel transmission. The fan belt, generator, oil filter, and battery were left alone since the paint wasn't too bad and the decals were close enough to straight for me. Everything else got tossed in Purple Power, which worked like a charm and left me with a clean if somewhat roughed-up set of parts.

For most of the car's details, I referenced Utahvette's replica build that would eventually be featured as a cover story in Car Kulture Deluxe. The most critical of these was the front end lift, which he pegged at 4" and I replicated by sawing off the suspension crossmember and regluing it to some standoffs made from rectangular styrene stock. The rear end was left at its stock height, though it required some extra pinning because one of the leaf springs broke during disassembly. The last modification I made was enlarging the rear wheel wells by cutting off the outer rims and replacing them with some thin sheet styrene. The rest of the chassis went back together with no issues, and was then painted Tamiya TS-29 Semi-Gloss Black.

To finish the now-repainted engine, I went through my parts box to find a dual quad intake and carburetors. The bells were some craft eyelets, topped with screen domes made from brass mesh. The headers were painted with Citadel's Typhus Corrosion and attached to a shortened exhaust system with scratch built glasspack mufflers. The radiator was one of the few parts missing when I got the car, so I found one that was close in my parts box and scratch built a new bulkhead for it. Once it and the engine were installed I finished up with a pair of scratch built radiator hoses.

The interior was also painted TS-29, with black flocking used for the carpet. All of the chrome was painted using Molotow Liquid Chrome, followed by Tamiya Flat Aluminum for the door panels, radio face, and other small details. I drilled out the steering wheel spokes and painted it silver with a semi-gloss black rim. I painted the instrument pod Apple Barrel Gloss Black, which was just different enough from the TS-29 to provide a little contrast. The gauges were destroyed when I stripped the old paint off, so I made some new ones and applied those to the repainted interior.

Not surprisingly, the body needed the most work. That was in part because of the aforementioned glue and paint job: even after stripping, there were still gobs that needed to be sanded off around the door handles, side coves, and trim. Once that was done, I cut off the lower front fascia and radiused the rear wheel openings. Once this work was done and the body was given a good sanding to remove the seams and any errant high spots, I painted it Testors Gloss Bright Red. Trim was a combination of Bare Metal Foil and Liquid Chrome, including several spots where the finish had been damaged on the original parts. The markings are all custom decals I drew up, as are the license plates.

Modifications, assembly, and paint done, there were just a few more details. The Radir wheels were aftermarket resin parts, narrowed in the rear to better match the movie car. I couldn't find a set of pie crust slicks that fit the wheels and openings, so I drew up my own and had them printed at Shapeways. The front tires are parts box items that fit just fine. Finally, the iconic peaked roll bar was made from stainless steel rod.