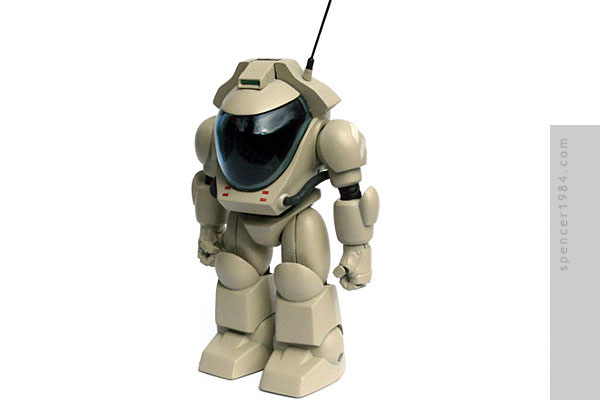 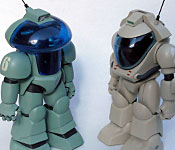 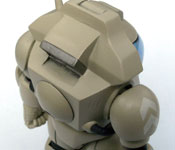 The companion piece to the EVA-WP-6000 Twinklehead, this Allover was a much simpler build. It didn't have the skirt or shoulder armor, and so had fewer fiddly pieces to worry about. In fact, the only places that needed modification were the shoulder sockets: originally, the full ball of each joint was outside of the body. I cut conical depressions into the sides so that these could fit in a more natural looking position.

I also removed the cast-in shoulder markings, made a new antenna from a straight pin, and filled in the joints along the arms, body, lower legs, and feet. As with the Twinklehead, I replaced the hands with a spare set from a 6" War Machine figure (good thing it came with three sets - these two kits left War Machine with the "repulsor blast" hands).

The final color is Krylon Almond; a bit less saturated than the peach color used on the animation model, but not too far off. The red marks on the chest were cut from pinstriping tape, the forehead light is a sliver of reflective tape colored with a magic marker, and the shoulder chevrons were cut from white decal stock.