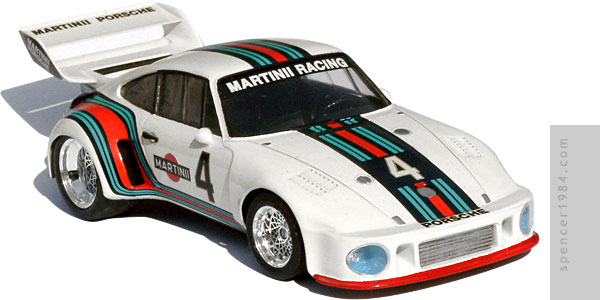 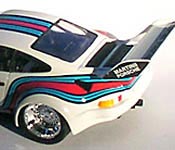 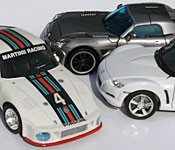 Cool Fact
Jazz's tech specs provide him with a 180 dB stereo system, which is a bit more powerful than "dazzling" and "disorienting." 170 - 180 dB is roughly the equivalent of a rocket launch.

In the full range of Transformer toys, Jazz was probably one of my favorite cars. I have always liked the shape of the Porsche 935, and I think it looks it's best in the Martini stripes.

This is a pretty straightforward buildup of Tamiya's kit, which comes from the same lineup of sports cars I used for Sideswipe, Sunstreaker, and Wheeljack. I used most of the decals provided in the kit, with the exception of the door, windshield, and rear wing "Martinii" logos, which I made myself to replicate Jazz's variant on the "Martini" logo.

When appying the decals, I started at the nose of the car and worked my way back. To my surprise, I was disappointed with the hood & cowl decals - there was no hole in front of the number, and there was no way the cowl decal would fit around the windshield wiper (Tamiya usually has excellent decals with their kits). I fixed these problems by cutting the hole in the hood decal before I applied it, and I cut the cowl decal so it would only go up to the wiper but not over it (I mixed up the appropriate colors and painted the body to complete the stripe). This did not bode well for the rear fender decals, since each side was made up of five decals that had to perfectly mate up around multiple compound curves and two holes in the body. Happily, whatever lapse Tamiya had with the hood stripe, they more than made up for it with the rear fender stripes. It did take some work (and a lot of patience) to get them to line up correctly, but in the end very little touch-up paint required.