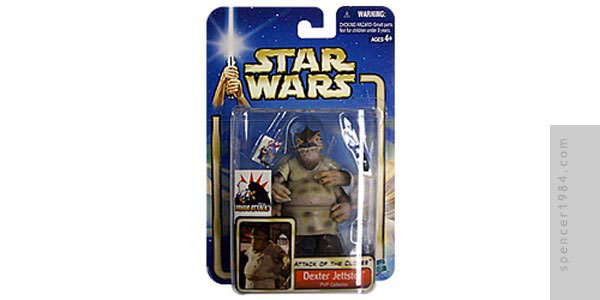 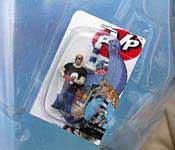 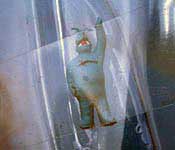 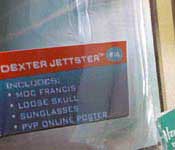 This is probably the most "in-joke" type custom I have done, based on the web comic PvP Online. PvP (Player vs Player) is one of my favorite comic strips; if you are not familiar with it, I highly recommend checking it out at www.pvponline.com.

This custom is based on the series of strips that ran starting on the last week in April 2002. This was when the new Star Wars Episode II: Attack of the Clones figures came out, and Francis (resident hardcore fan) was first in line to get the complete set. He misses getting the complete set by one figure (Dexter Jettster), which was picked up by the kindhearted but childlike troll Skull.

When I saw Dex in the store, I knew I had to pick him up. My origial thought was to make a larger Skull figure to hold Dex, but I decided that making Dexter the collector would be even better. I made the mini Skull and Francis figures by taking generic N-scale figures and reshaping them. For Francis, this meant shortening and rescuplting the legs to look like he was wearing baggy jeans, resculpting the original figure's suit jacket into Francis' trademark T-shirt, and removing the figure's hat. In Skull's case, I removed the figure's clothing and reshaped the head and upper torso. These are probably the smallest things I have detailed: each figure stands less than 1/2" (1cm) tall, and Skull's ears are only about the diameter of a human hair.

Once the figures were complete, I went to work on the packaging. Francis' cardback is a composite of a couple of images from the PvP website, and even has a hanger hole for good measure. He is packaged with his top hat (made from .040" rod) under a blister modified from an N-scale figure set. The PvP poster is taken from the "Panda Attack" T-shirt available on the web site, with the red background added by me. On the right side of Dexter's blister, Skull is packaged loose with a pair of sunglasses for Dex taken from McFarlane's Movie Maniacs T-800 Terminator (see the strip from Thursday, 2 May to see why I added these). Finally, Dexter's card was modified by changing the line on the front from "Coruscant Informant" to "PVP Collector", and replacing the accessory list with Dexter's new inventory.