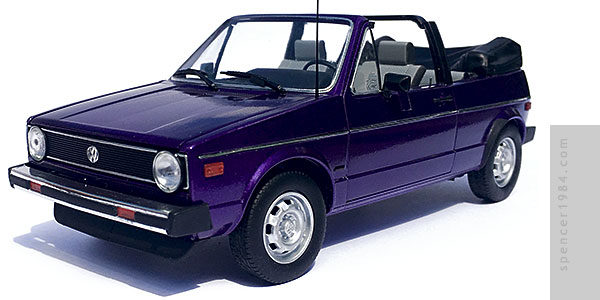 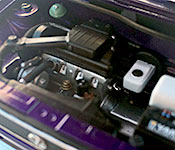 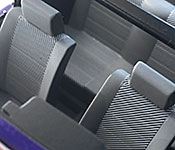 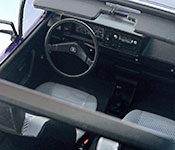 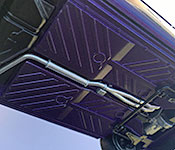 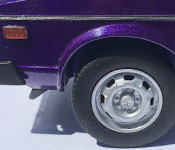 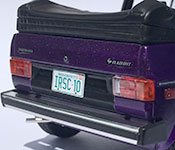 Although I have since read works by Isaac Asimov, Philip K. Dick, Douglas Adams, et. al., my first introduction to the world of sci-fi novels was William Sleator's Interstellar Pig. It was a nice balance of detail and pacing, and has held up surprisingly well since the first time I read it as a kid. Such an important piece of personal nostalgia was bound to become part of my model collection some day, and the winning contestant ended up being Revell's VW Golf Cabriolet. The book didn't give much in the way of specifics beyond a "purple Volkswagen convertible," but I thought the new Golf Rabbit was a good fit for the jet-setting trio of Joe, Manny, and Zena...and if other readers or characters saw it as a classic Beetle, well, that fits the narrative just fine.

Revell's kit is pretty nicely done. The parts count is high but not unreasonable, the casting only needed basic removal of sprue gates and parting seams, assembly was straightforward with well-done instructions, and the fit and finish were solid. The only place where things didn't really line up was the front right fender area, where the inner liner didn't sit up as high as I would have liked. It's not a deal breaker, though, and was more than offset by good things like the clever way the engine hoses layered together and the surprisingly tidy body assembly. Because it could be built as either a left- or right-hand drive, there were a few places where specific holes needed to be drilled or only one set of parts were to be used. The instructions were essential for making sure to choose the right options, and fortunately they were up to the task (unlike some other kits). It's one of those builds where you need to read carefully and double-check things before applying glue, but otherwise no trouble.

I did modify the kit in a couple of places to change it to US-spec, most notably the wheels, bumpers, and corner marker lights. I swapped all of these with parts from Revell's "California Wheels" VW kit, which was molded as a hatchback but otherwise the exact same kit as the cabriolet so parts swaps were easy. I also used the hatchback's "Rabbit" decal for the rear badge, but the rest of the decals were from the original drop top kit.

Paint was all done according to instructions, which were as thorough with color callouts as they were with assembly. I simplified a bit by using Grimy Black instead of making a custom mixture of black and gray, but that's about all. The body was Purple-icious One Coat Lacquer, which seemed to go on OK at first but then got a strange ghost pattern after clearcoat. I haven't had this happen with any of the other models painted with these colors, so why it happened here is a bit of a mystery. I never did get it all chased out, but after a while I decided that unless I wanted to strip it and start over (I didn't) I was going to have to live with a less-than-perfect paint job.

Final details included Molotow Liquid Chrome for the window frames, Bare Metal Foil for the bumpers, and tape for the side trim. The license plate was drawn up in Illustrator, with "IRSC-10" being Zulma's stat from the book (the Interstellar Relative Sapience Code is a measure of a particular species' intelligence...the lower the number, the smarter they are).