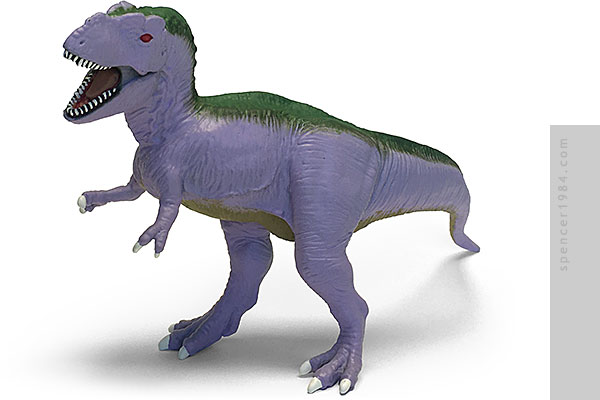 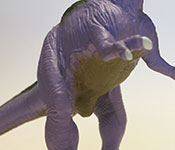 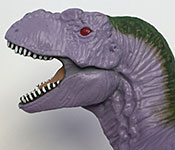 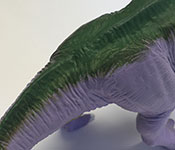 Since I made an Optimus Primal, it seemed appropriate to paint up a Beast Wars Megatron to go with him (I never did a G1 Megatron custom because the Masterpiece accessory fills that role just fine on its own). Having determined the rough size that I wanted with Primal and Grimlock, I picked up a T.rex figure by Safari Ltd. and got to work.

My first task was to decide what color to use. Krylon's Gum Drop was a pretty close match to the original toy's lavender/purple, but I've had some bad experiences spray painting PVC in the past. Still, it was really close and I already had it on the shelf (so no extra experimenting needed)...I just had to take a few extra precautions. The figure got a good washing with Dawn dish soap and warm water, then was sprayed using Napa's gray primer followed by the main color. This was allowed to gas out for a few days, after which I gave it several light layers of Dullcote. I'll have to see what happens after a few years, but so far the paint feels nice and solid with no residual stickiness like I've encountered with previous attempts.

Happy with how things were at this point, it was time to add Megatron's details. The green on his back was made by dry brushing several different shades of Apple Barrel paints, while the lighter belly was painted Tamiya XF-57 Buff. The edges between these colors and the purple were feathered even further using Tamiya's Weathering Effects, followed by more Dullcote to seal everything in place. I had masked off the inside of the Rex's mouth to preserve some of the colors, but only as a starting point. The gums, roof, and floor were all given a wash of The Army Painter's Glistening Blood to deepen the shadows and give it a more saturated hue, then the teeth were all individually painted to better define them. Dullcote was used to seal everything here, too, followed by a light touch of charcoal at the base of the throat and some chalking in the cheeks to add some extra depth. Finally, the eyes were rimmed with more Glistening Blood and a dot of Vallejo's Fresh Blood was placed at the center of each.