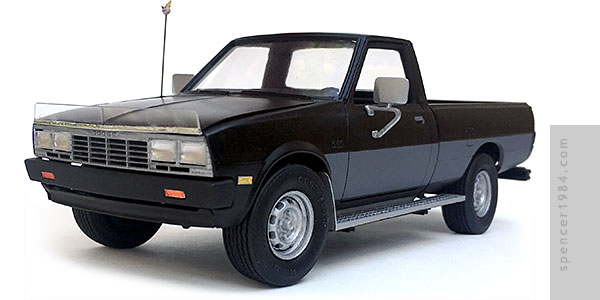 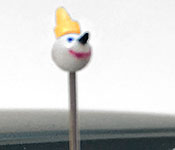 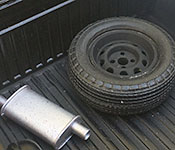 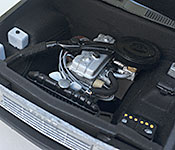 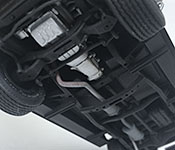 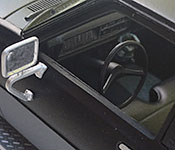 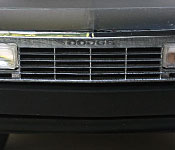 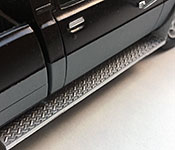 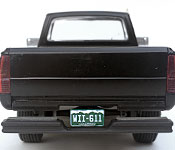 I started reading the Walkyverse during the early days of Shortpacked! and was immediately hooked (big surprise). My enjoyment of the comic led me to go back through the archives...not just of that comic but also the previous titles Roomies! and It's Walky! It was in this second comic that we encountered our first major vehicular player, Walky's '86 Dodge Ram 50. Since it was based on the vehicle creator David Willis was driving at the time, it was pretty accurate to the real truck albeit simplified for the comic. Even better, AMT made a kit of the D50 that could be used as a starting point.

My first task was to convert the kit's automatic transmission to the comic's standard using a spare from my parts box. I also added ignition wires and replaced the rear shocks with scratch built parts, but otherwise the chassis and engine were built right out of the box. Paint was flat black and several metallic shades, Dullcoted and lightly weathered.

Inside, I used the kit's optional parts for the stick shift and bench seat. The kit only had a racing steering wheel, so I swapped that with one from my parts box to give it a more stock look. Lastly, I made the Godzilla cup holder by carving a piece of styrene rod to shape, then painting it flat green and adding some details with ink and pastels.

The body was also mostly out of the box. The biggest change I made was the grille, as the one provided in the kit was an earlier two-headlight style. I drew up a new grille and had it 3D printed at Shapeways, then added headlights from my parts box over scratch built buckets. I also removed the badges from the hood since the later grille had moved "Dodge" to the top bar, and reduced the lights in the bumper by adding small bits of styrene over the lenses. Paint was Tamiya TS-14 Black with no polishing or clear to give it the look of an older truck, and the stripes were painted Krylon gray primer. While I used most of the details as they appeared in this comic, I did omit the "RAM 50" decals on the doors because they were missing more often than not in the comic, even when there was a clear view of the door.

With modifications done, it was time to add the rest of the Walky-specific touches. The bug deflector was cut from clear plastic and trimmed with a strip of aluminum tape. The Jack in the Box antenna topper started as a ball-headed straight pin with the hat and nose made from tiny pieces of plastic and the rest of the face drawn on. Running boards were made from the rest of the diamond plate left over from my Huffer build and styrene stock, painted silver and black, and mounted to the frame rails under the cab. The four main wheels were from a Fujimi aftermarket set paired with parts box tires, and the spare and muffler in the back are modified items from my parts box. The final detail was a "WII 611" (WiiGii) license plate, not expressly presented in the comic but seemed appropriate.