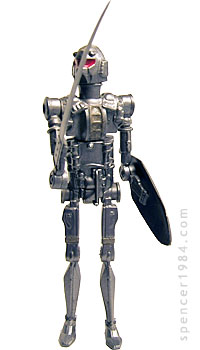 The Dark Troopers were a set of battle droids that appeared in Dark Forces, a video game set between A New Hope and The Empire Strikes Back. The Phase I troopers represent the baseline doids, armed only with a blade and a simple shield.

I used a combination of figures and parts to create the Phase I. The main chassis is from an IG-88, while the legs and forearms are taken from a Trade Federation Battle Droid. The head is a significantly modified unit from a cheap Gundam kit mounted on IG-88's neck. Finally, the hips, blade, and shield are partsbox/scratchbuilt items, the latter being a section of leg armor from a 1/100 Valkyrie kit.