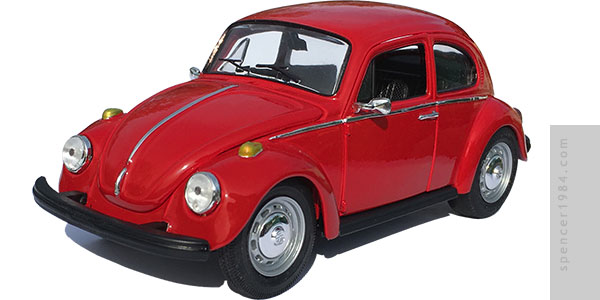 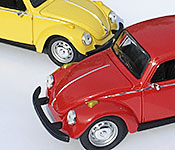 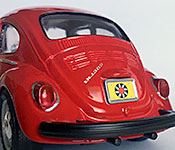 While I was working on Huffer, I revisited Dave "Zobovor" Edwards' ZMFTS for a refresher on his custom work (although there is no current version of the site thanks to FortuneCity's shutdown, the Internet Archive remembers). The visit reminded me of a two figures that were part of the original 1984 series of Transformers toys, but like Bumper were not part of the original character lineup. Unlike Bumper, though, these two were never managed to get an official backstory and so simply remained "Red Bumblebee" and "Yellow Cliffjumper." Dave came up with his own ideas for them, though, which leads to my inclusion of the Autobots' entomologist, "Ladybug."

Like Bumblebee, this started out as a Maisto diecast (I could have used any of the myriad other Beetles readily available, but I wanted to keep the look consistent between the two characters). I lucked out and found one that was already painted red, so all of the work here went towards upgrades: larger rear tires, black window trim, chrome side and nose trim, and painted parking and tail lights. The single biggest modification was to the front bumper, where I carved off the molded-in license plate bracket and fixed the contours before painting it and the rear bumper satin black. The rear license plate is a modified version of the design used on the toy's sticker.