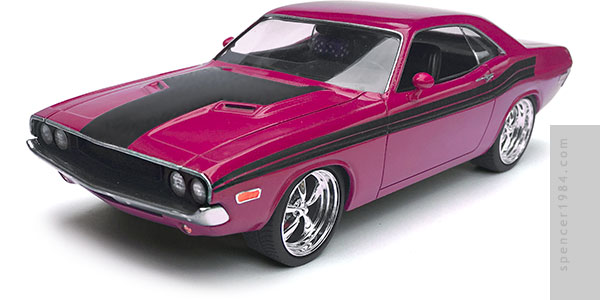 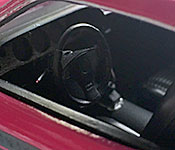 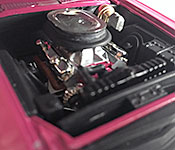 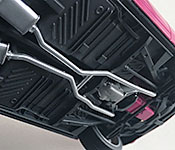 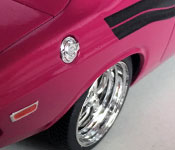 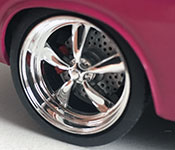 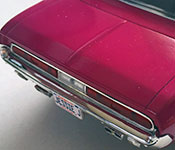 Very little of this project was actually planned, it was more just a string of coincidences that made it seem like a good idea at the time. First, the kit itself: I got a bunch of these Challenger kits when they were marked down, knowing they'd be good fodder for the myriad Challengers used by Hollywood. This one was sold under the American Dreams license (Revell conveniently ignoring the problem of having a Challenger in a show set from 1963 to 1966, but I digress), and was identical to the Vanishing Point kit other than being painted green instead of white. When the TV series Drive came out in 2007, I decided to turn it into Nathan Fillion's black Challenger and stripped the body to be repainted. The series ended prematurely, though, and I got caught up with other projects so this went back in its box.

Then around the end of 2014/beginning of 2015, I got around to working on some of my manga-themed kits and pulled out the Jigoro Jigorou Celica. It looked like a pretty straightforward kit, but I was at a loss as to what would be a good color for it. I tried Model Master's Panther Pink, but it was way too bright for that project. The paint was shelved and I moved on to other projects, including Dom's Chevelle from The Fast and the Furious and Fast and Furious—which was my first time using Pegasus' T's wheels.

Around that same time, I caught the video for the Jessie J, Ariana Grande, and Nicki Minaj song "Bang Bang." My penchant for music video cars is well established at this point, so no surprise that the Challenger near the beginning of the video caught my attention. I had the kit, I had the paint, and I had the wheels, I had just needed something to bring them all together and this was it.

Assembly was pretty straightforward. The engine was box stock, and the only modification to the chassis was relieving the upper inside corners of the rear wheel wells so the wider tires would fit. This wasn't a particularly delicate operation, since the body, interior, and tires would be hiding any damage I did. I simply ground out the well with a Dremel, test fit the wheel, and repeated the operation until the hub seated on the end of the axle. Brakes were also from Pegasus, so they were sized to fit the wheels and just needed a little paint. The interior received a new shift lever to replace the pistol grip, a new directional to replace the think chunk of plastic on the steering column, a late model steering wheel, and a set of purple dice from Ken's Kustom Kar Supply attached to a mirror from Revell's '70 Challenger. That kit also provided the sideview mirrors and fuel fill (the original one lost sometime in the decade between stripping the body and finishing the model).

Aside from the mirrors and fuel fill, I also had to make a couple of minor alterations to the body to match its video appearance. The first change was a blackout grille, which was done by carving out the original and replacing it with a section of PE mesh. The second was a little less typical: the stock pull-style door handles were gone, with a set of pushbutton handles up closer to the window sill. I filled in the seams around the stock handles and added new ones from Fireball Modelworks. Finally, I made a set of rear side windows from thin plastic sheet.

The body, engine, and some interior accents were all painted Panther Pink and clearcoated. I left the seats, door panels, and dash unpainted since the casting was pretty good and had a sheen close to what I wanted. The chassis and engine bay went flat black. Chrome trim was done with a combination of BMF and Molotow's liquid chrome. The hood and side stripes were custom decals I drew up in Illustrator, based on the stock R/T design but modified to match the MV car.