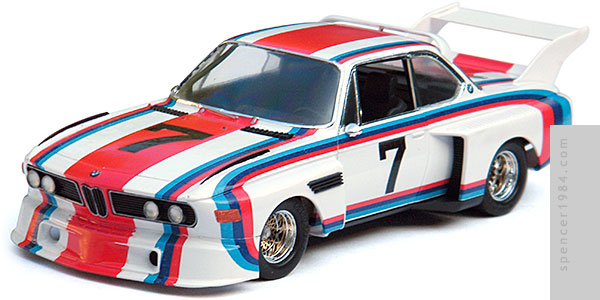 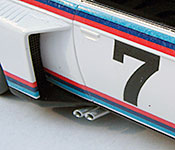 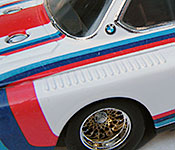 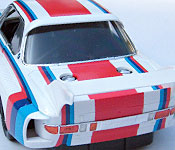 After building the Lotus Europa and Lamborghini Jota, I abandoned the third car in the series in favor of Fujimi's newer tooling and gave up my search for the elusive Miura. That didn't mean I was done with questionable old kits, though. Among their original Circuit no Ōkami series, Doyusha included a BMW 3.0CSL in 1/12 scale with a variation of BMW's striking tritone stripe paint scheme. The scale was a deal breaker, but fortunately Arii had a nigh identical version in 1/24.

Much like the Doyusha kits, this one is showing its age. Lots of flash, poor plating in several places, and questionable fit were the standard here. Most of it was just cleaned up and used as-is, but there were a few things that were so far off they couldn't be ignored. First, the exhaust tips were keyed the wrong way around, so that were you to install them without modification the forward pipe would be a trip hazard while the rearward pipe was still tucked under the car. The easiest way to fix it was to chop off the mount tabs entirely and create new tips, which I made from aluminum tube. Also, there were no interior panels in front of or behind the door panels, so you could easily see all four wheels from inside the passengers' compartment. I made a set of panels out of old business cards colored black with a magic marker...it's not the fanciest repair, but it looked pretty convincing once everything was assembled. I also drilled out the headlights to create proper buckets, replaced the kit supplied wing with a piece of sheet styrene, and added fuel caps in the rear.

Finally, I lowered the suspension all the way around. The front was pretty easy: drill new holes in the steering knuckles, then assemble as normal. The rear was trickier, though, thanks to the kit's motorized feature. The rear axle was held in place by a wide but thin loop of plastic, with nothing above it to drill into. Leaving the axle in the stock configuration meant the rear was too high, but putting the axle above the loop made the rear too low. I could have cut off the loop altogether and made a new axle mount, but since the body was attached by the time I discovered the problem I had to get creative. After trying a few ideas, I ended up creating axle offsets using the double-barreled mixing straws available at some coffee shops. The axle was first cut short enough that it fit through the chassis but stopped short of the wheels. Then, I made two axle stubs from heavy wire and mounted these in the wheels, so when the wheels were lined up with the body the stubs and main axle overlapped. These overlaps were then joined using the mixing straws (stub in one tube, axle in the other), keeping everything aligned and seated while the epoxy dried.

I used a combination of paint and decals to create the unique paint scheme. The body was first painted Tamiya Pure White, then masked and sprayed with Tamiya Italian Red for the center stripe. Then the decals were applied one section at a time and left to dry before I move on to the next section. I drew these in Illustrator, based on the 1/12 kit but modified to fit Arii's body. Once the decals were done, the car was clearcoated and the trim was finished with a combination of paint, ink, and BMF.

As with the previous Circuit Wolf builds, this is a good 3-footer. It's not the greatest kit in the world, but I'm very happy with how the stripes came out and the lowered stance is definitely an improvement.