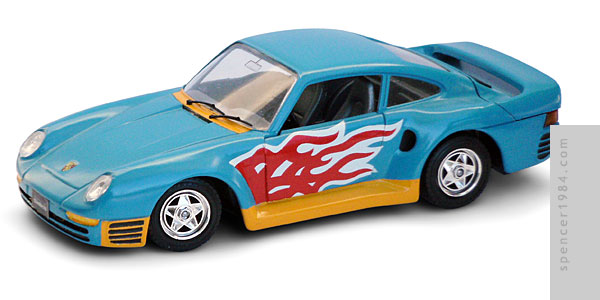 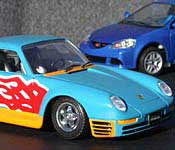 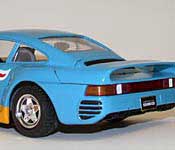 Cool Fact
When Porsche sent the first shipment of 959s to the United States in 1987, the US government refused to let the cars in because Porsche would not submit four cars for crash testing. In the years since, only one has been allowed in, and only as a display piece.
Source: The Porche 959 Page

After the first couple of years, Transformers drifted away from using real cars & trucks as alternate modes. Nightbeat was one of the last full-sized figures to have a recognizable alternate mode, though the proportions and paint job were much less realistic than earlier characters. Still, Nightbeat played an important role in both the comics and the toys (plus he was overall a pretty cool character), hence my inclusion here.

The model itself is an unmodified buildup of Maisto's Porsche 959. Since the car was prepainted yellow, I was able to save a step by simply masking off the appropriate areas and spraying on a coat of light blue. The interior is a light charcoal, accented with gray, silver, and black. After detailing the scoops and vents on the body, I finished the model with a set of custom made decals I created to match the prototype.