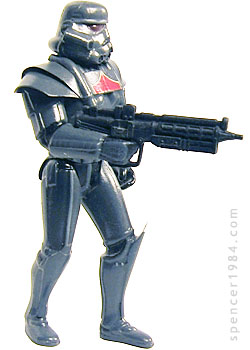 This figure represents a Phase II Trooper; larger and more powerful than the Phase I, it is armed with jet packs and an assault cannon. To create the Phase II, I started with a standard stormtrooper figure. I added the shoulder plates using sheet styrene, and the shin guards are sections of drinking straw. The strips on it's chest are sections of half-round stock bent around the shoulders and filled in to match the curves of the chestpate. The head was the most involved; I added the extra bulges, but I had to be careful not to destroy the features on the stormtrooper's face. When I was satisfied, the droid was painted Krylon Dark Gray. Details on the figure are painted gray, black, dark gray, and silver. The emblem on it's chest is a modified decal from a 1/24 car, and the gun is from a Trade Federation Battle Droid figure.