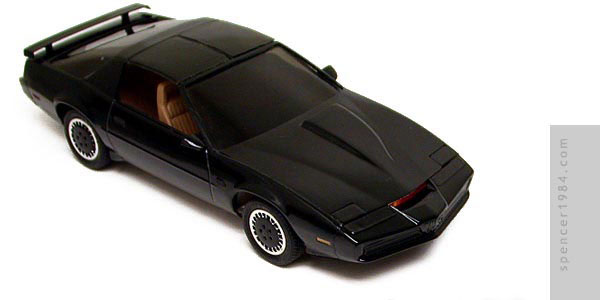 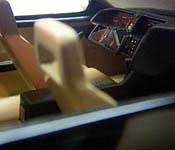 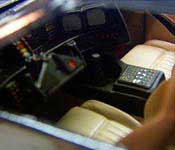 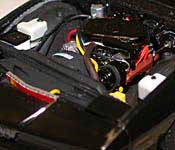 Cool Fact
The wings and fins that sprouted out of KITT in "Super Pursuit Mode" would've actually been a hinderance to his performance. With a drag coefficient of .34, the third generation Firebird was one of the sleekest cars of the time, and was the first stock-bodied car to break 300 mph at Bonneville (read about the record breaking Firebird here).

I got this kit as a Christmas present from my parents several years ago, and this is the third and (hopefully) final time I have built it. The first time, I was just getting started with model building and I had a lot to learn. At that time, the chassis was unpainted, the interior was gloss tan, and if I couldn't get something to fit right, I filled in the difference with glue.

A few years later, I had some more experience, and wanted to try to improve the model. During this time, Dullcote and Glosscote became available, so the chassis was now shiny unpainted black, and the interior was flat tan. I removed and re-fit some components, but I still did not remove any mold seams, ejection marks, or excess plastic. Then I found a 1985 Firebird kit for sale at a flea market, and decided to give KITT one more try. Once again the body was disassembled, but this time I was determined not to rush through the project. From the original kit I used only the body and some interior components. Everything else came from the later model.

The body was left pretty much alone, but I did fill in the spots on the rocker panel where it was attached to the plastic tree. The chassis are almost identical between the two kits; the only difference I could see is that the '85 Firebird uses a dual muffler exhaust system and KITT only had a single crossover muffler (although the instructions in both kits show the former...). I did make some modifications here, but it was mostly just cleanup; components such as the hoses, belts, and tie rod could not be assembled properly without removing excess material. The wheels came from the Firebird kit, because KITT's were too heavily covered in paint to really re-use (plus, I wanted to keep as much of the original kit intact as I could so I had a "before" and "after"). The tires in both kits were MPC's old BF Goodrich tires with the overly aggressive treads: these were replaced with a set from the KRL KITT Firebird.

The interior also needed some reworking. If built box stock (as I did originally), the face of the dashboard was nearly a foot farther back than it should have been, blocking access into the car, covering more than half of the seats, and hiding the gear selector entirely. I remedied this by removing the face and first 6" from the Firebird's dash, and removing the last 6" from KITT's dash. The two were then grafted together and shaped to fit into the interior (KITT's dashboard was too wide for the Firebird's bucket). The rest of the interior is a near box stock buildup of the Firebird's interior.

All in all, KITT is still a great car, and one of the best TV cars ever. There were a lot of things that could have been better about the kit, but if you are patient you can get a decent looking model in the end without too much hassle.