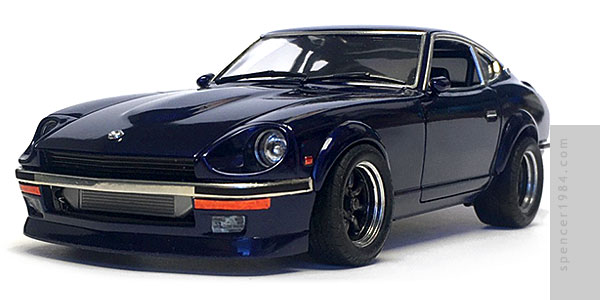 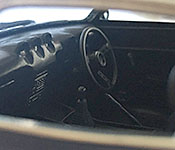 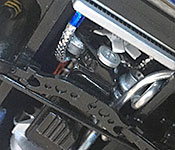 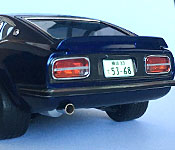 Although the bulk of this was an out-of-the-box build, it was a bit more involved than most of my other manga-themed builds. Much like Aoshima's Shakotan★Boogie Celsior, some modifications were needed to make the finished model look right.

The biggest alteration was the new front air dam. Fujimi had cast the new part so that it could be placed over the stock front end with no cutting required, but that looked awful since the lower opening was blanked off to hide the stock parts. So I cut out the opening, removed the cast-in intercooler, and cut off the stock fascia below the bumper. I then glued the aero dam in place, along with the fender flares and rear spoiler. The body was then painted Tamiya TS-51 Racing Blue over black primer, followed by several coats of clear to give it a good shine.

The chassis was painted the same TS-51 over black, albeit with just a single shot of clear and no extra polishing. The frame rails, fender liners, and suspension parts were left black. I detailed the springs with yellow and the calipers with red, otherwise everything was done in various black and metallic colors. The rear brakes had to be scratch built, since the kit only had round backers on that axle (likely supposed to represent the factory drums, but what lunatic is going to drive a 600-hp Z with stock brakes?). I also lowered the front suspension a scale 2-3mm to give it a more aggressive stance, and shortened the axle pins 1-2mm to get the tires fully under the wheel arches. The wheels were painted Tamiya Gun Metal with Molotow outer rims.

I wasn't sure what to do with the engine at first. The Devil Z's twin-turbo powerplant was a major part of its cool factor, but the kit only had the stock L24. It also had the hood cast as part of the body, and unlike AMT's Ferrari it lacked any underhood detail. I decided to make it a sort of modified curbside, with a fully detailed bottom half of the engine but nothing up top. The turbochargers were resin parts from Hobby Design, connected to scratch built piping and feeding a triple carb setup from a Lamborghini Countach. The intercooler was a cut down radiator with scratch built sides. Other details include ignition wires, scratch built radiator hoses, and a parts box alternator. The exhaust system aft of the headers is box stock, including the performance muffler, but I did replace the plastic tail pipe with a chrome metal piece.

Most of the interior was box stock, the only changes were flocking for the floor, a Hobby Design fire extinguisher, and a scratch built roll bar. The fire extinguisher was a late addition, included to cover the ugly gap between the center console and the raised floor behind the seats.

With all the major work done, it was time for final assembly. I had to relieve the clips inside the rear bumper so that the chassis would sit back far enough to center the wheels, and with the front clips gone with the stock fascia I had to figure out another way to secure the chassis. The closed hood meant there was a lot of hidden space up front, so I simply used double-sided mounting tape to stick the tops of the strut towers to the inside of the front fenders. The chrome trim was done using BMF and Molotow Liquid Chrome, the black bumper strips were done with Hasegawa Flat Black Finish, the colored lenses were done using Sharpies, and the lower driving lights are my own decals.