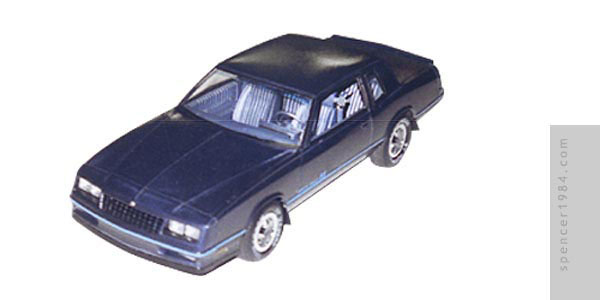 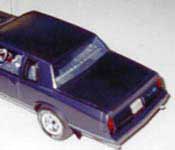 Cool Fact
The 1984 Monte Carlo SS was only available in two colors: blue and white. It was the last year that blue was an option for the Monte Carlo SS.

This was my first project based on a 1:1 car that I actually knew. Revell-Monogram did a good job with this kit; most of the work I did was detailing what was already there. The only problems I had with the manufacture of this kit were that the tail lights were incorrect, and there was a slight twist in the chassis. Otherwise, this is a great kit to work with.

To start, the chassis received upper control arms, upper A arms, fuel and brake lines, stiffeners, and new coil springs. I also relieved all of the holes and slots in and between the frame rails. I detailed the engine with wires, hoses, and the full compliment of life-support equipment found on all modern cars.

For the interior, I removed the third brake light and power window and mirror controls, then added window cranks, a headliner, visors, a dome light, and seat belts. Outside, I replaced the wheels with a set from AMT's 1969 Oldsmobile 442, and added an antenna, vinyl air dam, and mud flaps. The tail lights were not quite right for an '84 (or an '87-'88, for that matter). On the earlier cars, the rear fenders of the surrounded the outer edge of the tail light lenses. From 1987 on, the lenses extended to the edge of the body. The model had the correct appearance, but the lights were assembled more like the newer cars. To fix this, I glued the tail lights in place before painting, and filled in the seam where the body meets the lens. I masked off what should actually remain red, and painted the rest body color. Finally, I opened up the grille by sanding through from the back of the nose piece.

To finish the model, I painted the body using the appropriate Plasti-Kote's GM blue and clear coated it with Rust-Oleum's Glossy Clear Coat. All of the Monte Carlo graphics were custom painted directly onto the car, and the stripes are painted strips of thin tape.