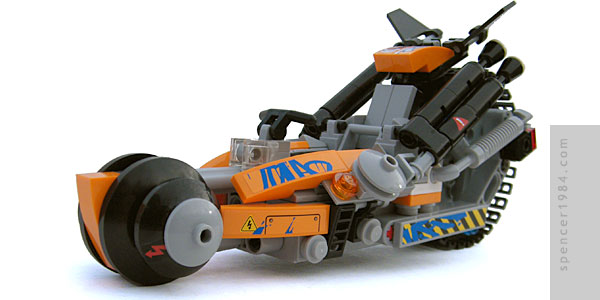 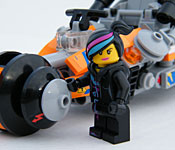 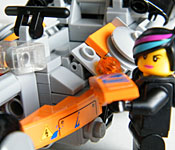 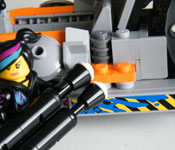 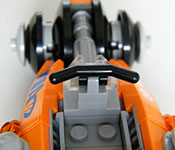 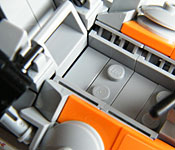 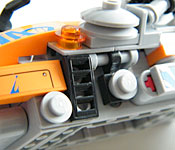 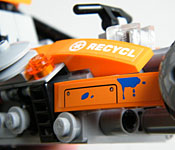 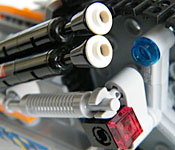 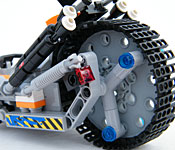 Like the LEGO Batman sets, the custom cycle built by Wyldstyle in The LEGO Movie was almost perfectly sized to go with my other TV & movie cars. Unlike the Batmobiles, though, the official set actually needed a fair amount of work before it matched the on-screen prototype.

The front wheels were replaced with 3x3 dishes, and the smaller "hubcap" dishes were moved out using round 2x2 and 1x1 plates. Getting these to fit was a challenge, since a 2L axle wouldn't capture both dishes, but a 3L axle was too floppy. There was no way to do it with proper LEGO parts, so I ended up creating my own 2.5L axle. The end result is objectively worse than the rubber tires used in the kit, but look distinctive enough and are so prominently featured that it would have been wrong to leave them unchanged.

All of the colors surrounding the cockpit were all changed to be screen-accurate, which meant a lot more light bluish gray (this included the control yoke, the floor & sides of the cockpit, the clips and cheese wedges near the back, and the 1x1 round plates decorating the sides of the bike) and clear cheese wedges for the headlights. On the sides of the bike, the stacked 2x2 dishes were moved down and a 1x1 corner element was placed behind them, with a flick fire pin placed in the bottom of the outboard flamethrower/exhaust. The handles under the stacked dishes were also swapped for more screen-accurate parts. Modified plates, headlight bricks, and 2x1 panels were used to create the guide just ahead of the rear wheel.

The base was switched from the kit components to a single 4x6 technic piece. The "No Entry" and hazard stripe tiles were moved back half a stud, and a red 6L Technic axle was fed through to give the correct red "T" elements. The plates at the forward ends of the muffler pipes are supposed to be orange, but that color doesn't exist (yet), so I made do with white instead. The opposite ends of the mufflers received mech claw guides, while the trailing ends of the flamethrowers received black goblets and white 1x1 plates with holes.

With the exception of the front axle, everything up to this point was fairly simple parts swaps and basic rebuilding. But the rear wheel was going to be a challenge, since it uses two things LEGO simply does not make: a light bluish gray Technic triple axle connector, and a 60-tooth gear. Fortunately, there is an option on Shapeways that provides the wheel, and both it and the connector were painted to match the surrounding parts as closely as possible.

If official parts for the rear wheel, axle connector, or muffler bases ever come out, I will revisit this project. But until then, I'm happy to have a more accurate representation of the "Super Cycle" in my collection.