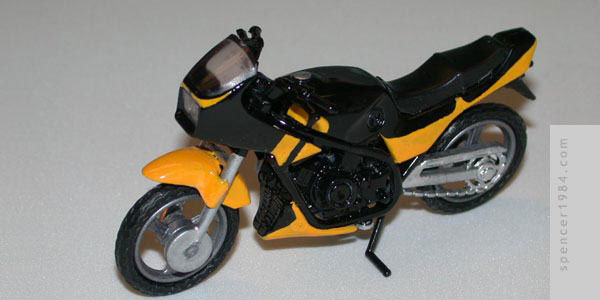 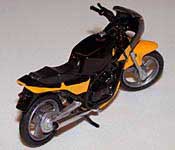 I don't often build motorcycles, but when K*B Toy stores had 1/24 motorcycles for about $1 each, I had to pick a few up. This was the first modified bike I have done, though with the abundance of source material, I have plenty more I can build.

Sideways is frequently referred to as a Kawasaki Ninja, but the overall shape of the figure does not seem to match any one particular motorcycle perfectly. I chose to start with a Honda VF500 Interceptor, as the lines looked closest to Sideways'. I disassembled and repainted the entire bike, using Krylon Glossy Black and Testor's Gloss Yellow for most of the bodywork. I replaced the Honda's small front fender and 5-spoke wheels with more prototypical parts from another Motor Max bike. Finally, I removed one of the two exhaust pipes to better match Sideways - the revised pipe and suspension components were then painted silver before their final reassembly.