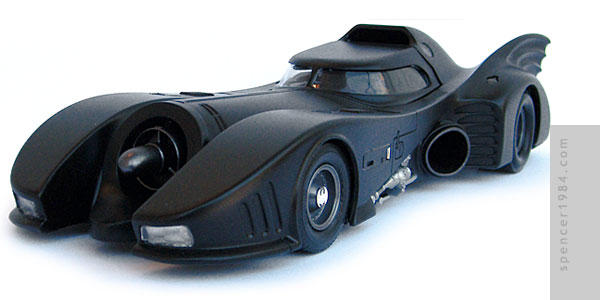 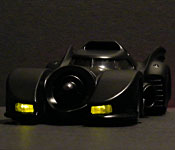 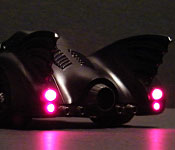 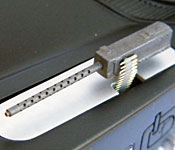 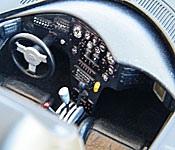 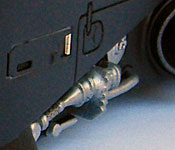 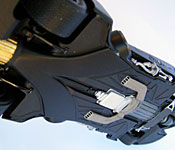 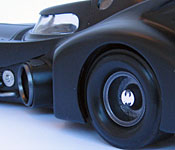 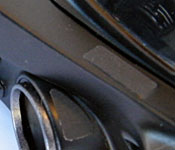 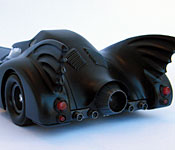 Before starting work on this model, I made plans on how I wanted it to differ from the Batman Returns Batmobile. The 1989 car had fewer on-screen gadgets, but a more complex paint job with several details in varying shades of metal. The promotional art used brighter metals, but these were all toned down for its film appearance and that was what I wanted to recreate with this model.

I also wanted to try something completely new for me by adding functioning lights. I purchased several LEDs, a resistor, and the appropriate battery from Radio Shack, and used a switch from a Green Goblin bobble head toy and some wiring I had on hand to make a custom circuit. The headlights are rectangular yellow LEDs set at an angle to fill the headlight openings, and the taillights are 3mm and 5mm red LEDs that were sanded flat to look more like the original taillights. The custom battery box and switch are in the right machine gun bay, so they can be accessed easily without interfering with the look of the finished model.

Most of the rest of the model was built with minimal changes. I opened the headrests and added wire mesh to the openings, added carpeting, and painted the cockpit details to match the movie car as closely as possible. The chassis was totally box stock, with silver, steel, brass, and jet exhaust used to pick out the details.

AMT's body was pretty accurate right out of the box, with one major exception: the side intakes. These were cast with flat screens just inside the bezels, even though there was no such design feature in either the movie or promotional art. To correct this, I cut the chrome pieces down to the outer ring, then made a set of conical intake tunnels from sheet styrene. The body (including the new intakes) was then painted Tamiya TS-29. The wheels, side intake bezels, rear nozzles, intake, and exhaust were painted gunmetal, and the side details were painted flat silver. The anti-skid treads on top of the side intakes were made from sandpaper, and the heat shields around the side details were cut from an old electric shaver head.

Finally, I upgraded the machine guns with brass barrels/heat shields from Master and resin ammo belts from Live Resin. These were actually 1/35 scale parts for use with military models, but the 0.50 caliber components in that scale worked out to be nearly perfect for 0.30 caliber parts in 1/25 scale. The revised guns were mounted on platforms made from a spare set of gun doors so that they can be removed easily and stay clear of the battery and switch. Although these are not accurate to the prototype, I like the idea of mounting the guns this way - it keeps bullets and debris from collecting in the gun wells, plus the cylinders under the guns allow for some lateral movement—exactly like what was shown when the Batmobile cut the door in half going into the Axis Chemical plant. The way I made the platforms also meant that I could swap the guns between this and the Returns Batmobile easily and they would be stable on both cars.