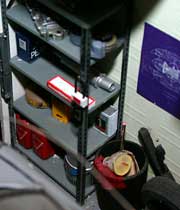 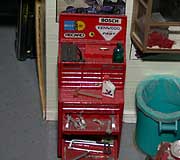 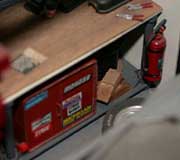 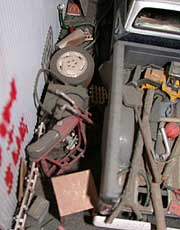 This was my first major diorama project; a sci-fi scene based on the idea of a meeting between alien & human survivors in a post-disaster setting. The diorama base measures 24" x 36", and includes a scratchbuilt garage with working lights, nearly a dozen vehicles, and several figures. 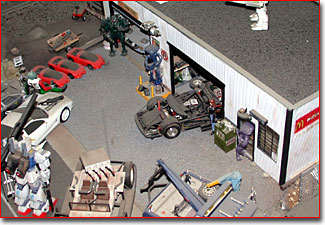 Individual pages detailing the work on the Ferrari Combat Chassis, Kongo Attack Prototype, Corvette Fighter, Crawler ATV, and Boss Shindoa Mustang are available. The blue tow truck started as a Snap-Tite model from Monogram. Most of it was built box stock, but I removed the engine halves that were molded as part of the body and chassis so that I could leave an empty engine bay. I also added a bug deflector made from clear stock, and generally distressed the truck with various dents, dings, and weathering.

The black Barracuda near the nose of the tow truck started as a Snapfast Plus kit by AMT. I cut off the hood and passengers' door, and replaced them slightly ajar (the door also has a noticeable droop). I also removed one headlight, one taillight, and the driver-side front wheel. The appropriate suspension components were scratchbuilt for this corner. New side windows were made from clear stock, with the rubber seal hanging loose on the drivers' side. The interior is pretty much box stock, but with plenty of garbage and dirt added. The whole car was given a thorough weathering; rust, dents, and a heavy dusting to show hat the car has been there for a while.

In the back corner of the garage is a 1992 Mercury Cougar that the owners of this garage were working on before the disaster occurred. Everything behind the firewall was built box stock. The hood and left front fender were replaced with aluminum foil panels, crushed to simulate accident damage. The engine was left out of this car altogether.

The final vehicle in the scene is the 1965 Chevrolet pickup at the opposite end of the garage. Modifications to this include the open passenger-side door, half-disassembled engine, detailed interior, broken slats in the bed, and heavy weathering and distressing. The front bumper and nose were deformed to indicate some long-ago accident damage, and the rest of the body was rusted and dented. The rear window was left out, and simulated broken glass (made from table salt crystals) litters the seat. Debris in the back includes wood, tools, a single ski, a deflated basketball, an old garbage bag, and a broken toy front-end loader made from a Micro Machine.

I also added a few figures to the scene. The two aliens leaning on the front of the building started as ID4 host aliens. They were painted with Krylon spray paint, and then given a coat of Testor's transparent black window tint to bring out some of their details and make them look slightly slimy. The green guy sitting on the hood of the Corvette smoking his cigarette is Greedo. The 1996 Power of the Force line of Star Wars toys included a great representation of Greedo, so I just had to use him somehow. I decided to make him a fighter pilot, so I altered his pastel costume into a more realistic flight suit. I filled in the joints and painted his vest to match the Corvette.

The imposing dark green figure standing by the left side of the left bay door started as the old Go-Bot Monsterbot "Vamp". He was taken apart, cleaned, and put back together in a slightly more realistic way. Three EXO Squad 3" robots are also on the scene: one on the railroad tracks, one at the other end of the road, and one on the roof of the garage. They're pretty much straight from the box, I just added some detail and hollowed out the ends of their gun barrels. The silver robot sitting on the hood of the Kongo Attack Prototype is entirely scratchbuilt from plastic and wire. The large robot in primary colors is a 1/144 scale Gundam RX-178 with some extra details added to it, such as the hand-held missile launcher on its hip.

Finally, the only human on the scene was made from a Macross figure that came with a 1/100 Valkyrie kit. I shortened her legs to a realistic length, added jeans made from real fabric, and gave her a shotgun from Lindberg's Ford Crown Victoria police car.

The garage itself was constructed from 1/4" foamcore. The siding was made from aluminum foil, pressed between two sheets of Evergreen Plastics corrugated siding stock. Once the siding was formed, it was cut to the appropriate height and glued to the outside of the foamcore. The gravel roof was made from sand (painted black), and the tarpaper roof around the skylight was made from tissue paper. The garage sits on a 1/4" sheet of masonite, which is laminated to another 1/4" sheet of masonite that makes up the overall base. Landscaping was done with 1" foam insulation to get the basic contours. The gravel parking lot was made from sand, while the rocks around the railroad tracks (regular "G" gauge track painted for realism) are small stones from outside. The road was made from 1/8" black craft foam painted with a Testor's paint stick. The grass was made from fake fur dyed green.

Inside, some of the details came from Fujimi's ever-popular Garage & Tools set. This includes the lift, metal shelves, wheeled toolbox, fire extinguisher, and many of the miscellaneous tools and office equipment. Many of the interior details were scratch built, though. These include the cabinet, trash cans, work table, bookshelves, pay phone, oil tank, soda machine, TV, and air compressor. I made these from sheet styrene, parts from other kits, leftover plastic & wood parts from around the house - essentially, anything that worked.

I'm very happy with how some details came out. The small fan mounted on the back wall was made by attaching flat styrene to a central shaft, then carefully bending wire to make the old-fashioned shroud. A chainfall hanging in the corner of the garage was sculpted from styrene stock, with a separate handle and an actual metal chain. The shop vac was made from various bits of plastic stock, with a hose made from heavy guitar wire (some "splits" were left in the hose to make it appear old & broken). A box of vacuum attachments is on the toolbox in the back of the garage, made by sculpting bits of plastic. The soda machine was made from sheet styrene, with the logos taken from a Pepsi Challenger stock car. The buttons were made from clear stock over hand-drawn logos, and the money deposits were painted onto more styrene stock. The air compressor was made from part of a toothpaste tube with compression cylinders made from parts of a pen.

Outside, scratchbuilt items include the gas pump, small trailer, fence (made from an onion bag & plastic rod stock), and the newspaper machine. The little red wagon was made from a Hot Wheels 1996 First Edition Radio Flyer Wagon. The front needed to be patched where the toy originally had a steering wheel, and the handle & wheels were added.

The side of the garage was kind of a dumping ground for broken objects. These include a scratchbuilt folding chair with no back, a dented mailbox, an old scooter frame (made from the scooter from a Vandal kit), an old table, and other miscellaneous junk.

Some details were used both inside and outside of the garage. These include the cement blocks (carved from 1/2" foamcore) and garden hoses (made from Christmas tree wire).

There are literally hundreds of other items added to the scene, most of which fade into the background (as in reality). I've already taken up way too much space with this write-up, but if you'd like to know more about anything here, or if you'd just like to send me an email about the project, feel free to send me an e-mail at spencer1984@yahoo.com. 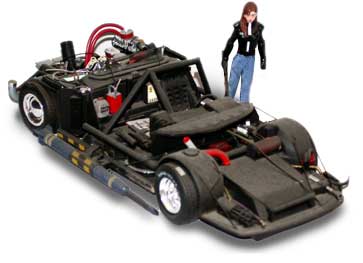