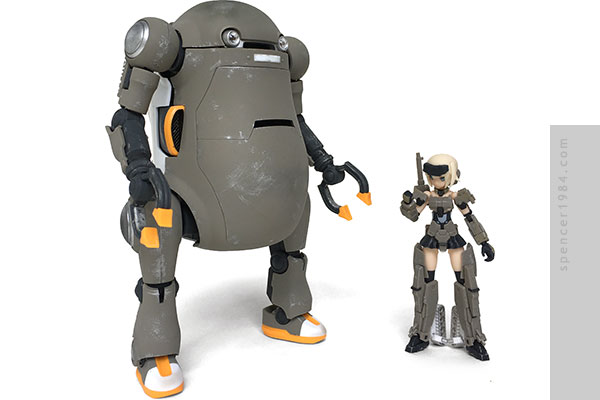 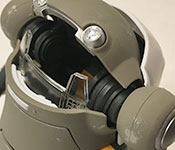 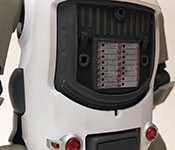 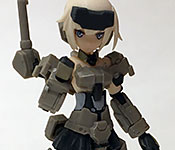 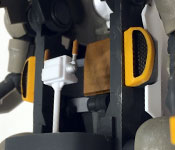 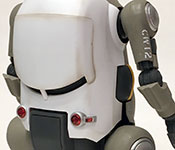 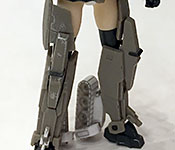 This kit was a rather strange mash-up of two disparate lines by two manufacturers, with no real connection beyond "this sort of works." Kotobukiya's Frame Arms Girl is a spin-off of their previous Frame Arms series, now with manga and anime tie-ins. Out of that was born the "Hand Scale" series, with characters shrunk to approximately 75mm tall - the same height as Kotobukiya's 1/24 Hexa Gear. Meanwhile, over at Hasegawa, Kazushi Kobayashi's MechatroWeGo was seeing release in both 1/35 and 1/20 scales. Someone apparently noticed that despite the wildly different origins and scales, Gourai and the WeGo could actually work together as a combined kit...not in a really collaborative way, so much as two kits were cast in similar colors and packed in the same box. I rather liked the look of the WeGo, and combined with a 1/24-looking figure I suddenly saw it as something that would fit in with my collection (Kobayashi has even mentioned the idea of an "adult-sized" WeGo, so this wasn't all that far-fetched).

Since this was my first time building either of these, I stuck to box stock for the build to see how it all went together. The results were better than I could have guessed. Both Gourai and her WeGo are snap-together kits molded in color, combining PS, ABS, POM, and PVC plastics to get a nice layered look with tons of detail.

The WeGo was the more involved build, first assembling the limbs and then building up the torso until everything could be put together. Joints are all poly caps, so movements are stiff but smooth (making it easy to pose and not worry about it sagging or falling over). The only thing I found that may difficult for some modelers in the instructions - they're very thorough, to the point of being nearly cluttered. But there are several subassemblies that absolutely have to be done in a certain sequence, so double- and triple-checking the parts before assembly is important. Once assembled, the only seams that remained visible were along the mech's upper arms, upper legs, and wrists. Everything else was cleverly worked into the design. Strictly speaking, no paint was necessary to get a decent look. But a few details like the back cushion, side intakes, rear lights, and some other small details really make it pop.

Gourai had fewer parts, but as they were substantially smaller the overall difficulty was pretty close to the WeGo. She also needed a lot more detail paint than the mech, including some gray-green panels that had to be specially mixed to match the plastic. She comes with several hand options, but I went with a combination of closed fist and loose grip, allowing her to strike a determined pose. Weapon-wise, I just used the shoulder cannon and left the rifle and knife for the parts box.

The WeGo was designed as a conveyance rather than a battle mech, and even in drab it didn't look like much of a warrior. It did, however, remind me of the Power Loader from Aliens, and I liked the idea of this being a support vehicle for field or base use...the kind of thing that would be used for loading trucks, stacking crates, or just general labor. So once assembled, I gave it a thorough shot of Dullcote, then used drybrushing and Tamiya effects to give it a well-used look. The stencil on its arm is a dry transfer from Archer. Gourai was similarly weathered, though not as heavily as her mech.

Overall, I was very impressed by the engineering that went into these. I particularly like the WeGo, and can see why they're such a popular item. While the face and potato-shaped torso give it a friendly air, the simple lines also mean there's nearly infinite possibilities for custom models that still retain the spirit of the design.