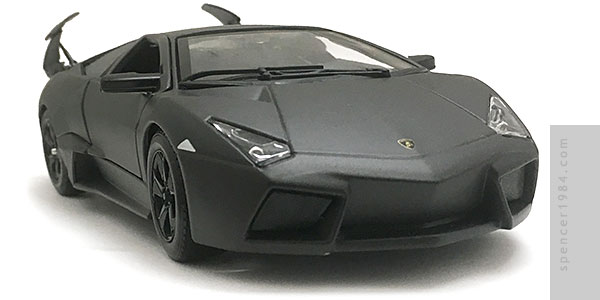 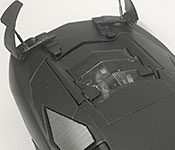 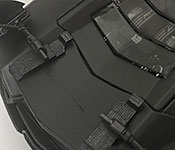 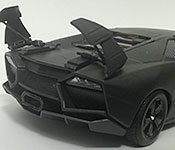 The Batmobile used for Batman and the Outsiders continued the tradition of more-or-less stock looking Batmobiles. This time, artist Julian Lopez added some air foils to the rear of a Lamborghini Reventón, similar to the flaps on the Tumbler.

I started with a Bburago Reventon, since it was already painted a good Bat-esque charcoal gray. The rear quarter windows appeared to have slats over them in the comic, so I removed the diecast's engine intake planes and covered the area with some clapboard siding painted Model Master Titanium.

The main airfoils were made from bits of a couple of Star Wars kits: a mini Sith Infiltrator for the panels, and Anakin's podracer for the arms and bases. A few bits of styrene stock helped tie everything together, and then they were painted Tamiya Gunmetal. The small upper flaps are from a Gundam aftermarket upgrade kit, and they and the outsides of the airfoils were painted using a custom mix I made up.