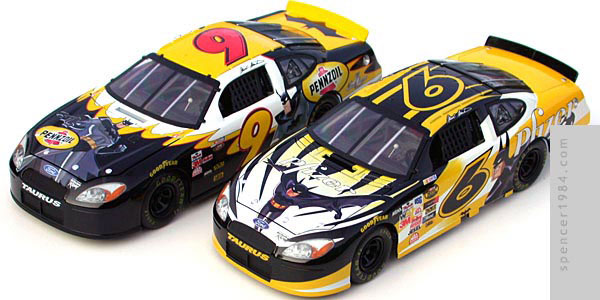 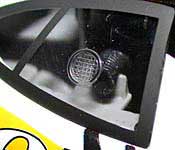 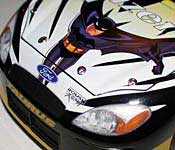 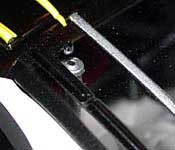 Cool Fact
Although seven drivers participated in the two-day Justice League event weekend (August 21 - 22, 2004), only six of the seven members of the League were featured on cars. Hawkgirl had neither a unique car, nor was she on any of the "team" cars.

My Batmobile collection was bound to spill over into other Bat-related vehicles sooner or later. My first venture into that territory was this set of 1/24 Ford Taurus stock cars by Team Caliber. Since I got them both at the same time and made nearly the same modifications to both, I decided to cover them both on one page.

The overall look of the cars was pretty good, they just needed a little extra detail to stand out. Both cars were disassembled, and the roll cage padding, electrical systems, and hoses were painted. The rear adjustment points and cool air hoses were all hollowed out, and the cars were reassembled. Both received a set of Bare Metal hood and trunk pins, and he #9 car (thanks to its light colored roof) received a set of roof flap decals from a Slixx set I had left over. Finally, both cars were lightly polished to remove some of the scuffs and prints they got from the factory.