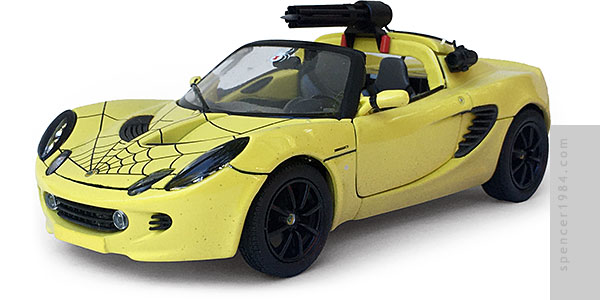 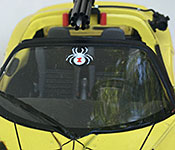 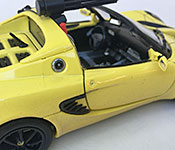 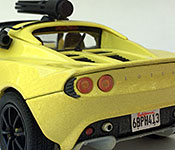 Another entry from The Asylum, Death Racers was one of the first movies I saw from them. Jason Statham's Death Race had just hit theaters around the same time, and I thought it would be fun to make a set of all the "Death Race"-themed cars out there. So when I found out that Welly made a Lotus Elise already painted yellow, I picked it up.

The car did need a couple of revisions: It had a front license plate, which I removed, filled, and repainted. Also, the wheels on the diecast were silver instead of black. I didn't want to lose or have to recreate the center caps, so I masked those off and painted the wheels semi-gloss black. Then it was time for the custom additions.

The spider web was a custom decal I made, and with liberal use of water and setting solution I actually got it to conform to the complex shape of the Lotus' hood. The windshield spider was hand painted, and the license plate was my usual custom print.

The rollbar-mounted weapon was a bit of a challenge. Near as I can tell, the prop department simply strapped eight lengths of tubing around a rocket-shaped cylinder and called it a day. No receiver, no frame, no ammo feed...just eight tubes open front and rear with some wires stuffed in them. The FX team added "gun sounds" and CGI muzzle flash in post production, but that's really the only way you'd know this was supposed to be a multibarrel gun. So like I did for the Fuzzmobile, I took what we saw and tried to build from there. The barrels are made from brass tubing, with styrene stock used for everything else. A section of rod stock was turned into a rocket for the center, and more styrene stock was used to build the red canisters on either side of the gun mount. The unit was then connected to a scope from a Kotobukiya parts pack with a length of wire.

My final step was some light weathering, done with several shades of paint to suggest road dust built up around the base of the car while otherwise remaining "new."